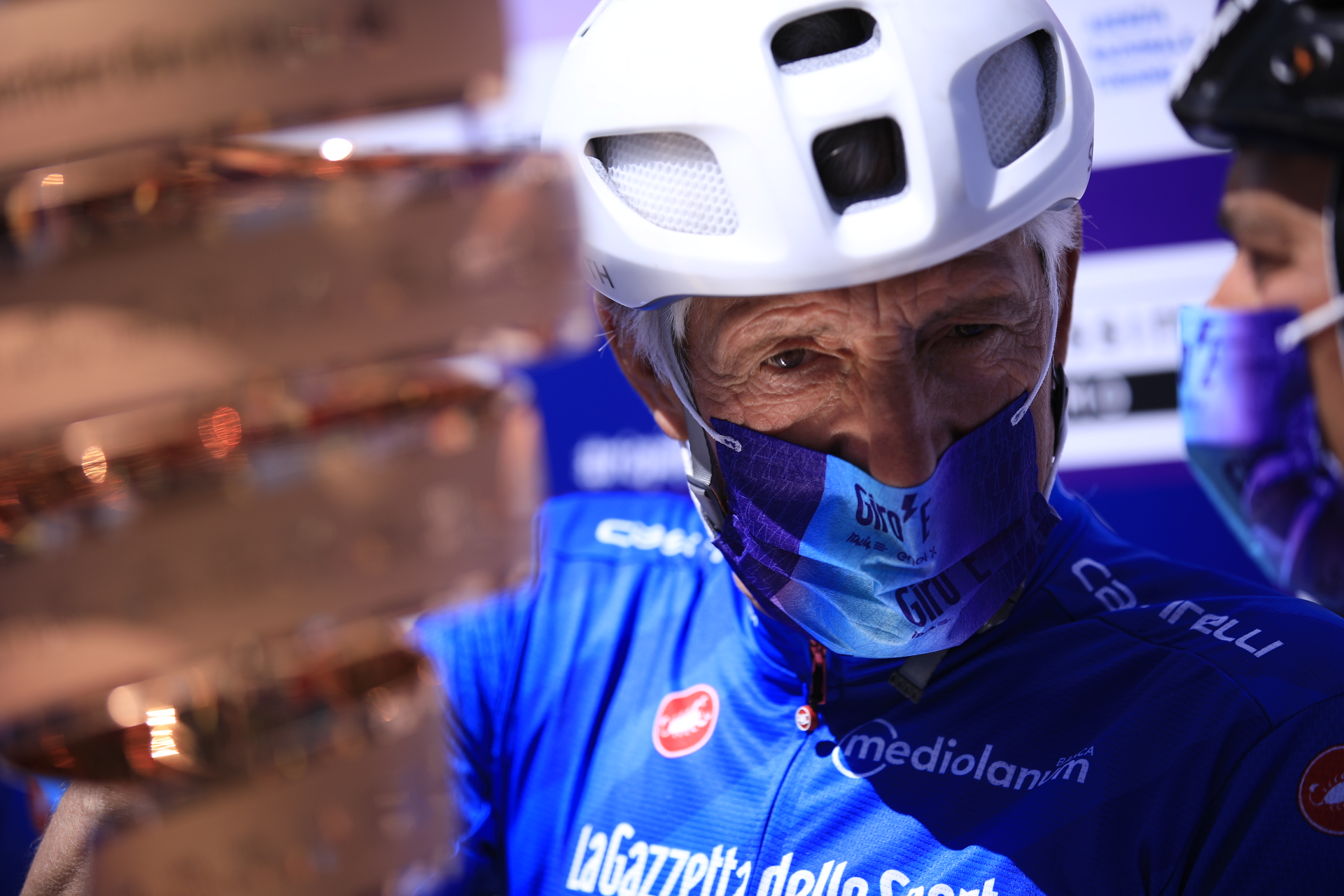 It’s never too early for a glass of wine. Just as it’s never too late to turn your day around. Crecchio, province of Chieti, starting town for stage 7 of the Giro-E 2021. Sitting at a table in a restaurant in this beautiful medieval village in the hinterland, the straw yellow Pecorino d’Abruzzo in the glass, and in the eyes the memory of that face, impossible to forget.

He is Francesco Moser. He will be 70 years old on 19 June and today he is dressed again as a cyclist (in the colours of Team Banca Mediolanum), because in less than an hour he will get on his Fantic pedal-assisted bike and start the 87.9-kilometre stage almost entirely along the Adriatic coast; his destination is the town of Termoli.

A wrinkle on his face, as if the wind and not life had sculpted it, as if those marks on his skin were the thousands and thousands of roads he has travelled in his career as an extraordinary cyclist. And the eyes. The eyes of the champion, the eyes of all champions. They look impassive, perhaps dull, remembering situations so intense that today it is hard to keep up with them.

Francesco Moser. The Giro-E was missing him: the champion of champions.

The greatness of a champion is not determined by the number of victories, but by the value of the opponents: do you agree?

“Yes. I started racing in the era of Merckx, Gimondi, Fuente, Motta, Bitossi. Along with me came Battaglin, Baronchelli, then Saronni, Hinault. Abroad there were Maertens, Pollentier, Thurau, all riders who made great victories. Thévenet, for example, who won the only Tour that I did, was a rider who won two Tours de France, he was a strong climber. Among the Spanish climbers there was this Fuente who, when he decided to go, would start and leave everyone behind. He often got his times wrong in his exploits. I remember that at the Giro d’Italia he attacked on the first climb and then… I remember that at the Giro d’Italia he attacked on the first climb and then… On the big stage at Bassano, when we were coming from the Cime di Lavaredo, the year Merckx won the Giro by twelve seconds over Baronchelli, Fuente attacked on the first climb. We caught him with three kilometres to go. He did the whole stage alone. All he had to do was start on another climb and he would win. If he had started on Grappa, he would have won the stage. For sure. Instead, he was in a breakaway all day and we caught him at the bottom of the Grappa descent, three kilometres from the finish. He was a really powerful climber, because when he decided to attack… I remember that he won a stage in Sorrento, where I came second, beating Merckx in the sprint, it was a stage of climbs, not big climbs, but you did Monte Faito, which was a thousand metres of elevation gain, not a walk in the park. Those were the races. If you decide to race, you must accept everyone you find on the road. You can’t do without them. If you want to be recognised as a great cyclist, you have to compete with the best and possibly beat them. It wasn’t easy, but sometimes I did it”.

Cycling is hard work. This is its beauty and its curse.

“Fortunately, fatigue can be forgotten, because you do it a little at a time and when you win, or things go well you forget about it. But you know that the next day you’ll be racing uphill or on the flat, chasing the others or trying to break away. I have never been afraid of fatigue. If it were for fatigue, I would still be racing now”.

Once upon a time, you cyclists were the heroes of the crowd, just like footballers are today.

“In those days, the cyclist was more in people’s hearts because we were much closer to the public. Today the rider is almost like a machine, he’s controlled by the flagship team via radio. In the flagships today they have television, and they see everything that happens, so the rider… is not like us. Back then, we decided. By the time the car arrived things had already happened, because as long as you were in the breakaway the cars couldn’t get near us. They couldn’t tell you on the radio to stop, pull or don’t pull. Today everything has changed. We had to make immediate decisions and we didn’t have much time to do that”.

The past can be a source of inspiration, right?
“Young people live in the modern age of technology, and maybe it seems absurd to them. It depends on how you look at it. It’s clear that you can’t look at our cycling to make the cycling of today. If young people do the things we did, they won’t win today. The races have had their own history. From the point of view of preparation, nutrition, the way teams are run, the world has changed a lot and I don’t think you can take an example from our races to become a cyclist today. Even though cycling is still a difficult sport, with the climbs, Paris-Roubaix, the roads, they are still like that. There is more speed, there is more assistance, the equipment is better, but the difference must always be made by the cyclist in some way. The only example you can take from our races is sacrifice, understanding that cycling is not a walk in the park, you have to dedicate yourself one hundred per cent”.

Let’s play the tower game: choose between Paris-Roubaix, Giro d’Italia and Hour Record.
“I’m keeping the Giro. It’s something I had been chasing for a long time. It’s not a one-day race, it’s a three-week race, to be built up day by day. However, three victories at Roubaix are not a small number”.

“I only did the Tour once. The Giro thirteen times. Which one do you think I liked best?”.