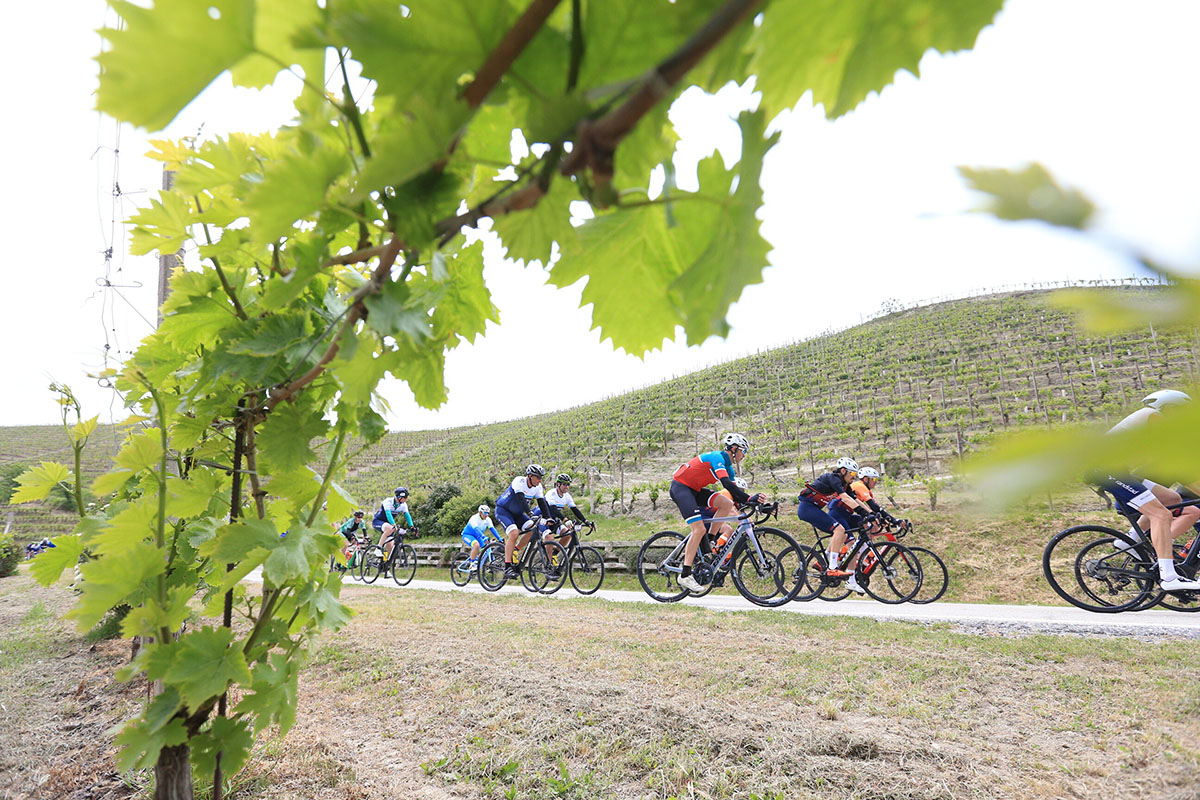 When the protective gods are important, one can rest easy. That’s how it’s been since the beginning of time. So, Giro-E stage number 3, from Alba to Canale: The weather in the morning is not the best, but in the land where writers such as Cesare Pavese (Santo Stefano Belbo, grazed by the Giro d’Italia) and Beppe Fenoglio (Alba, lovely town of departure) were born, where Carlin Petrini was born and founded, in 1986, Slow Food, which started as an association but was already an idea, an inspiration, or rather a philosophy of life that was being cleared through customs for the first time and, in those excessive, frenetic, somewhat senseless 1980s in which drinking was a way of meeting rather than tasting, introduced the concept of slowness with an efficacy that had not belonged, not for their lack, to illustrious men such as Milan Kundera, for example.

In short, it is a stage of authentic beauty, of the countryside, of good drinking, of great literature, of slow living and travelling, immersed in landscapes unique in the world, among shy people whose character reflects that of the territory, where everything is whispered and never shouted, authentic and concrete. There could be no better way than by bicycle to literally savour the sensations that this territory offers. And what the Giro-E gave its participants was in fact this, an immersion in an idea, a scent, with Alba at its centre, travelled and retraced in search of the route of the Giro d’Italia, on which the electric cyclists grafted themselves after just 34 of the 79.6 kilometres in total of this stage. Amongst other things, in the most beautiful part of the Corsa Rosa route, its final move with a finisseur finish. The fatigue counter, which in uphill stages is given by the metres of elevation gain, was 1500 metres today. It required tuned engines and well-charged batteries, but it was worth it for the scenery, the impressions and, as mentioned, the deities and all.

The character of the day missed out on all this beauty and intensity, because he actually rode yesterday for the Sara Assicurazioni special team. But his story is so beautiful, and he is so likeable, that we take the liberty and even the pleasure of presenting him today, when he has already returned home. Besides, probably pedalling.

He is 47 years old, his name is Emiliano Cantagallo and he has climbed the Zoncolan 110 times. But, he says, this was not his greatest achievement. “No, it was setting up a hotel: the only hotel in the world reserved for families of cyclists. If you come and you don’t have at least one bike in your family, you can’t stay. It’s in Carnia, under the Zoncolan, that I stop once a week, on Saturdays”.

What is the Zoncolan?

“It’s a sentence to be served. That’s what they say. For me it’s a friend. I know it by heart, metre by metre. I accompany all types of cyclists to the top, from the strong cyclists who do the Granfondo to the older cycling tourists. Climbing it is now normal for me.

Why did you come here?

“I’m from Rome but my grandparents were from Carnia. I’ve been coming to Carnia since 1974 and it’s a piece of my heart”.

When did cycling come into your life?

“Right away. My father used to race bikes. When I was born, I had a little bike next to my cradle. When I grew up, I started racing on the bike, then I abandoned it for a while and when my father passed away I went back to the bike, basically in his name. Then I started working as a tour guide, which is my job and I like it a lot”.

Is that all you did as a job?

“No, absolutely not. When I tell my story, people get scared. I started with scuba diving, then I went to the Vatican, because a steady job is a steady job, and then I quit the Vatican, and not only that, I got my wife fired, we sold our house and opened the first hotel in the world just for cyclists, which not by chance is called Dangerous Slopes. Crazy, right? We’ve been in the papers: in a country where a steady job is still a dream, nobody leaves it’.

And then you also opened the Roma Bike Park, in Vallelunga.

“With my partner Giancarlo Fisichella, a friend of mine for 20 years now. We rented out the Vallelunga circuit outside of opening hours: when there are no cars or motorbikes, we run bikes. Now there’s a schedule, because we have road bikes and mountain bikes. In addition to having 4 kilometres and a hundred metres of track, there are four extraordinary routes in 35 hectares of land of incredible historical value, in which there is also an ancient Roman road”.

“Not yet. But our next project is to open a hotel like the one in Friuli on Lake Bracciano”.

What do you think about electric bikes?

“They are the future. I work in tourism, and since the introduction of the electric bike, the range of people who can go on certain excursions and visit certain places by bike has increased a lot: I would say it has increased by 90 per cent. Whoever says no to the electric bike is crazy. I’m a fan of muscle bikes, it’s obvious, I do 30,000 kilometres a year in the saddle, but saying no to the electric bike is crazy, fundamentalist. It allows families to share beautiful experiences, to see incredible places, which before were reserved only for those who, at home, practiced the sport of cycling seriously”.

So you also take families to the Zoncolan?

“Of course, and that’s one of the things that makes me love my job. I’ve ridden with super-trained husbands and wives who accompanied them on electric bikes. Wonderful”.

What did you think of the Giro-E?

“It’s a good formula. It represents the desire to make everyone aware of a more sustainable type of mobility. It’s very important to do that. You can’t breathe in big cities anymore. And then the bicycle doesn’t consume any fuel, you don’t have to pay tax, and you’re healthy when you ride: what more do you want?”.