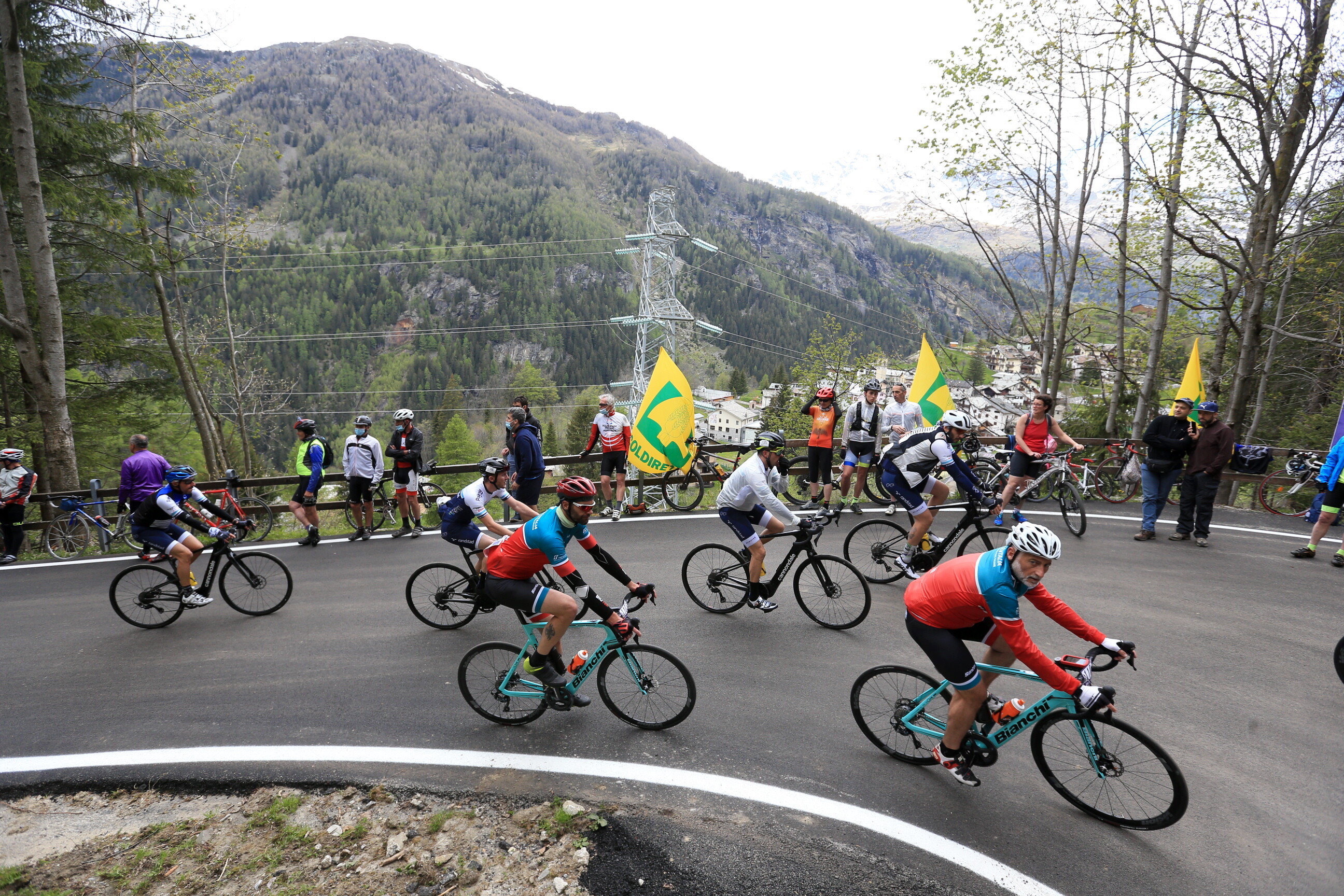 Only 31 and a half kilometres but an interesting elevation gain (1,100 metres, instead of the 3,500 of the pros, who in total have covered 164 kilometres and faced giants such as the San Bernardino Pass, a climb of 24 kilometres, and the Spluga Pass), for the last uphill race of the Giro-E 2021. Departure from Madesimo and arrival at Alpe Motta. Three stars of calibre for this day, before closing in style tomorrow in Milan.

Madesimo, then. It is a place devoted to sport: in Valle Spluga, in 1911 the Touring Club Italia organised the first “winter week” in history. The opening of the ski lifts favoured the development of the valley, which today is a popular holiday destination. By the mid-19th century, however, Campodolcino and Madesimo had already established themselves as holiday resorts. The strengths of this area are its nature and rural settlements, framed by the Rhaetian Alps, the many waterfalls, and Alpine lakes. Numerous excursions can be organised, including those along the Cardinello Trail or the Carducciano Route. On the environmental sustainability front, Madesimo has free recharging stations for cars and numerous e-bike hire points. A project is underway to encourage district heating at municipal level with the aim of eliminating boilers from structures and private homes, transforming the town centre into a limited traffic zone.

The route of the stage is particular: a ring from Madesimo to Madesimo, to be covered twice, with a final digression towards Alpe Motta, altitude 1,727 metres. In this case the Giro-E invents its own route, in which the final stretch coincides with that of the Corsa Rosa, again a climb, the toughest of the day, as in the last stages. The Alpe Motta climb is not impossible (7.6% on average, with peaks of 13% in the last stretch, where the average rises to 8.6%), but it comes at the end of a demanding Giro in which, in addition to the captains who have done all the stages, there are numerous participants who have cycled, for example, in this last week, which was decidedly demanding; and after so much climbing, each kilometre weighs double and the muscles burn.

At the start, the group looked more like a parterre. In addition to Giorgio and Natalia Mastrota, father and daughter, wearing the jerseys of the ENIT – Agenzia Nazionale del Turismo team and on their third stage, we had politician Bruno Tabacci (ENIT), former professionals Daniele Colli (Toyota) and Marco Cattaneo (Randstad eCycling); for the RCS Sport team, Sky Sport presenter Davide Camicioli, canoeing legend Antonio Rossi, actress Matilde Gioli, and Roberta Guainieri, Councillor for Tourism, Sport and Quality of Life of the Municipality of Milan.

He was not there today, but in the Casalpusterlengo-Stradella stage wearing the Randstad team jersey, Ottavio Missoni Jr, 36, Vittorio’s eldest son and grandson of his namesake Ottavio, an Olympian in London in 1948. “I’m as sporty as he was,” says Ottavio Jr, who is two metres tall. “In fact, I started with the sports that my grandfather liked, especially basketball, which was my first sport. My passion for motorbikes and travelling came from my father. I also compete in international rallies. I like cycling, I ride a lot on a mountain bike, because above Varese, where I live, there are many trails, especially off-road. The Giro-E was the first time I used an electric bike, and I liked it. Since July last year I have been Chief Sustainability Officer at Missoni and I’m responsible for the company’s growth in the area of sustainability. Today a company must prove that it is ethically sustainable. We believe in this and we decided that this role should go to a family member, to show that our family want to be in charge of it. I like old motorbikes and rally bikes, but I use them infrequently and on off-road routes. Green mobility is a road the world has taken and there’s no turning back”.