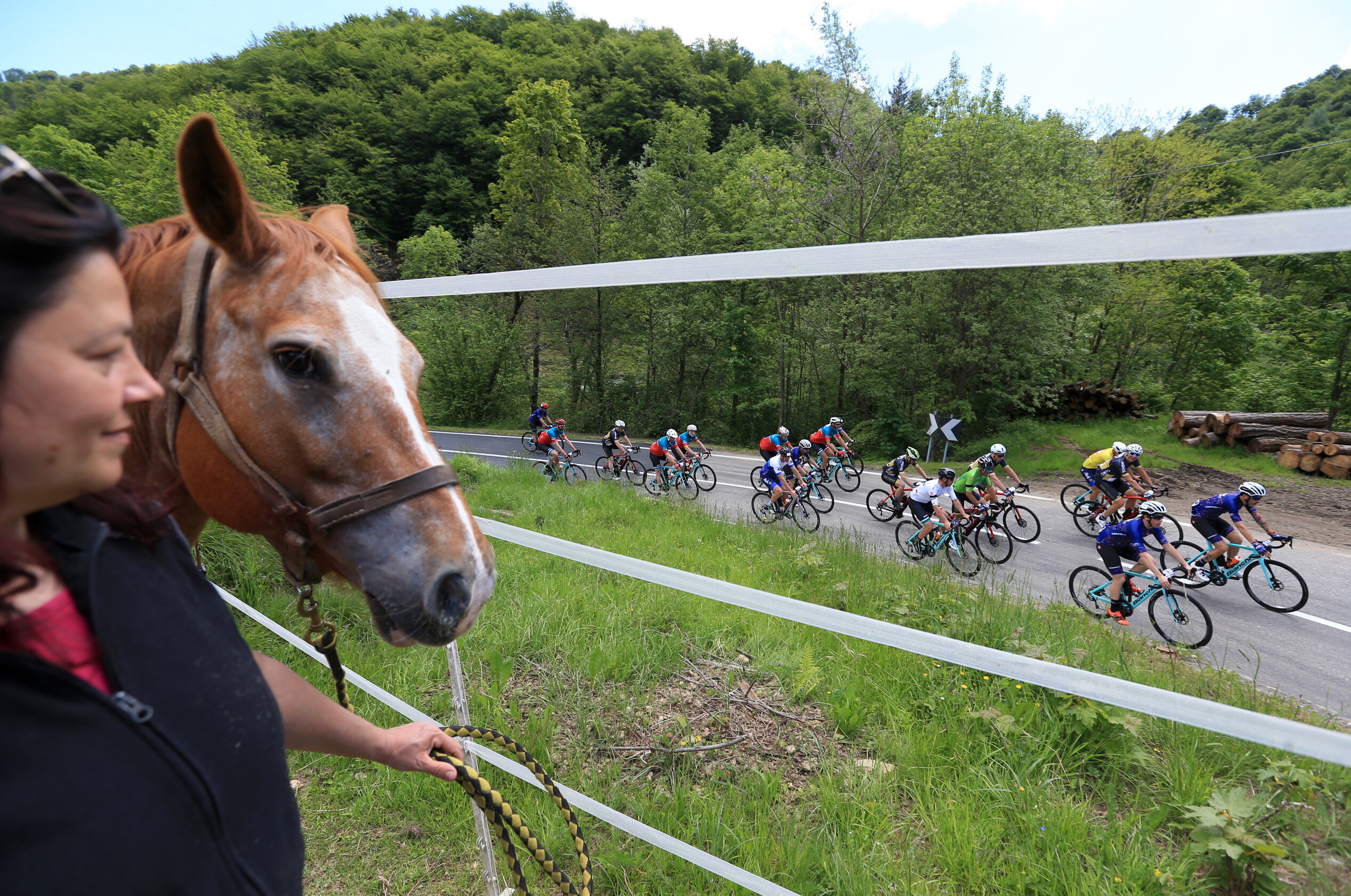 But before we talk about the stage and cycling, we must remember the 14 victims of the Stresa-Mottarone cable car tragedy on 23 May. The departure from Stresa had been planned for some time. Ready to take a step back, the organisers of the Giro-E received an invitation from the local authorities to confirm the departure from Stresa. A rightful homage was paid to the victims: the starting village was not set up and the usual team and participant presentation activities were not carried out, a minute of silence was asked to the teams and staff, and the captains started the stage with a black band on their arms.

The stage in brief: from Stresa to Alpe di Mera (Valsesia), 72.6 kilometres for 1,900 metres of positive elevation gain. The Giro-E joined the Giro d’Italia route more than halfway through the total distance of the Pink Race, in time to climb the last two peaks: the Colma Pass and, of course, Alpe di Mera, where the finish line was located. The last 10 kilometres were tough, with gradients of 9-10% and peaks of 15%. Those who pedalled yesterday, in the Casalpusterlengo-Stradella, had stiff legs, because it was very hot and the hills of the Oltrepò have left some marks.

As in Sega di Ala, but to a lesser extent, the heart of the stage was the last climb, the real highlight of today’s stage and the challenge for the electric cyclists. Thanks to the motor, the experience proved to be a pleasure as usual, allowing the participants to enjoy not only an enchanting panorama and particularly favourable weather conditions, but also to experience the Giro d’Italia route in the atmosphere of the Giro d’Italia: the people were already waiting for the champions and happily welcomed the electric cyclists in the meantime.

In recent days, among them was Alessandro Ballan, professional from 2004 to 2016, winner of a Tour of Flanders in 2007 and, above all, of a world championship in 2008 in Varese. Thin and in almost the same shape as in his best days, Ballan rode cheerfully through the group, doling out advice and perhaps a few secrets to his fellow riders. “Everyone thinks of the electric bike as a scooter,” he said. “It’s not, there’s no throttle. You can adjust the assist and you can also struggle. It is a revolutionary means. I have friends who have been cycling for years, but now they are no longer young enough to go out in groups: the e-bike has allowed them to ride with friends as they used to and I have seen them reborn. The e-bike is also useful for people who don’t have the time, but who have a passion for cycling and only manage to ride once a week or even a month. With the pedal-assisted bike they can still have fun, go for a slightly longer ride. I enjoyed the Giro-E experience. Nowadays I like looking at the view, chatting with friends, not riding like a madman, but my fitness is still as good as it was then, although the numbers are obviously not what they used to be and I’m a bit out of breath. If I add the 250 watts of the electric bike motor to my own, I think I could be in a group with the profs”.