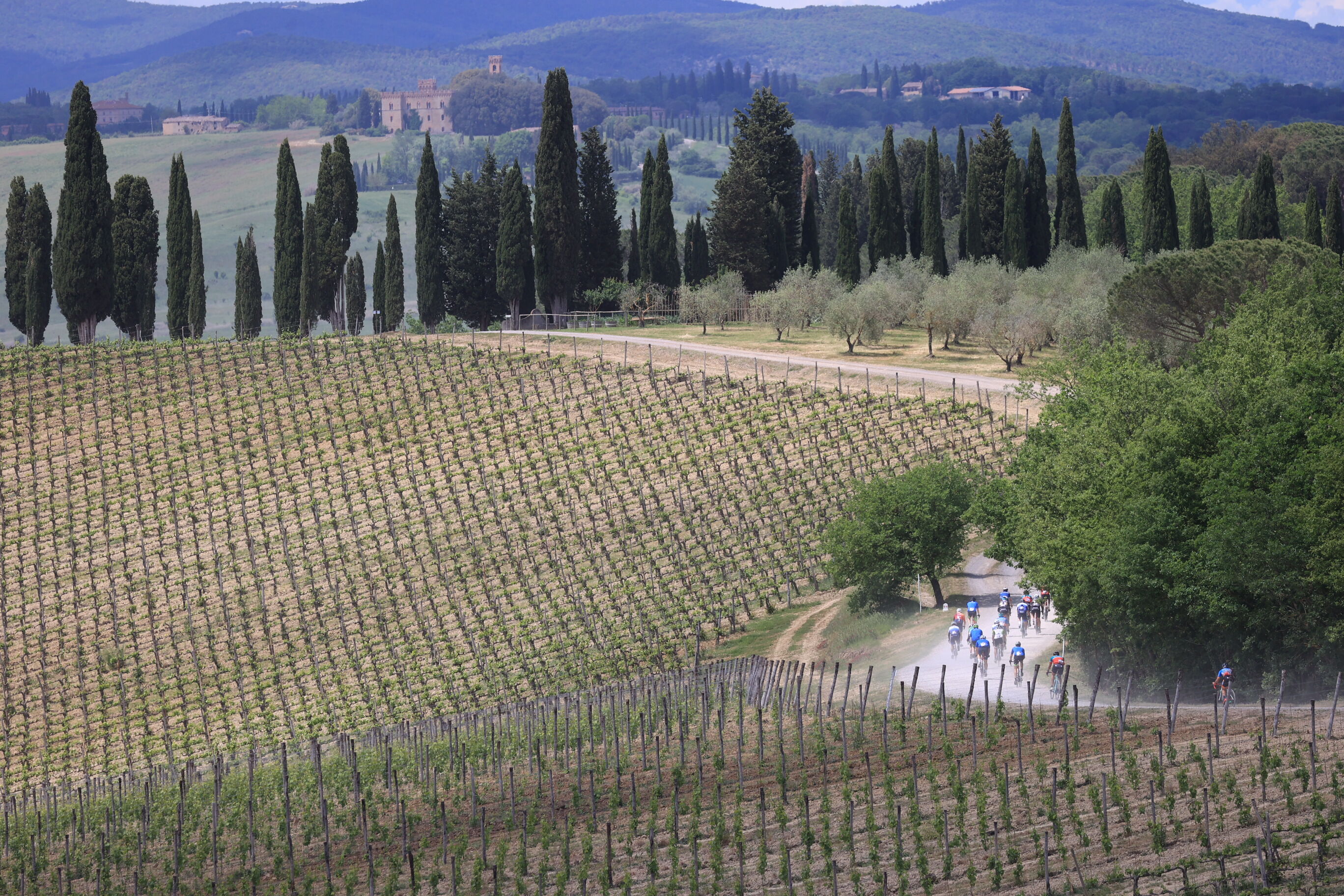 The Brunello di Montalcino Wine Stage has been, so far, the most popular of the Giro-E 2021 with the beautiful people who traditionally love the Giro.

At the start came Manuela Di Centa, a monument to cross-country skiing with two Olympic gold medals at Lillehammer 1994 (free technique and classic technique), two silver and three bronze medals at the Olympics in Albertville, Lillehammer and Nagano 1998, four world silver and three bronze medals, and a World Cup winner in 1994 and 96. She was the stage idol.

No less so Yuri Chechi, the former gymnast, who instead cycled: in the ENIT National Tourism Agency team, with his friend Max Lelli. The lord of the rings won Olympic gold in 1996, as well as five World Championships, four European Championships and 13 Mediterranean Games. A keen cyclist, it was the first time he had used a racing bike equipped with a motor.

Great Cycling was represented, as well as by the usual familiar faces among the captains, by Alessandro Ballan, winner of the 2008 World Championships in Varese, as well as the 2007 Tour of Flanders, ambassador of Banca Mediolanum and indeed standard bearer, today, of Team Mediolanum. He was joined by Igor Astarloa, the 2003 World Champion in Hamilton (Canada), with some gems in his trophy cabinet such as the 2003 Fleche Wallonne and the 2006 Milan-Turin; he competed in the Valsir team, with which he will ride up to and including the Zoncolan.

In the RCS Sport team, Nicola Larini, one of the best Italian racing drivers of the nineties, who thrilled the public with his exploits in the German DTM touring car championship with Alfa Romeo (he won the title in 1993) together with his teammate Alessandro Nannini; he also boasts 75 Formula 1 Grands Prix, including a second place with Ferrari in the tragic San Marino Grand Prix at Imola in 1994, the day the legendary Ayrton Senna died.

A top-class team gathered in Montepulciano for the start of the 11th stage of the Giro-E. The first documented mention of Mons Politianus dates back to 715 AD. Disputed by Siena and Florence, it often changed hands between these two cities. Its golden age was the Renaissance. Places of interest include Piazza Grande, the Duomo, the Museo Civico Pinacoteca Crociani and the Temple of San Biagio, a masterpiece of the Italian Renaissance. Not to be forgotten is the lake by the same name, a natural reserve of rare beauty. Home of the most typical Tuscan cuisine, it stands out for its Chianina steaks, Cinta Senese pork, unrivalled sheep’s milk cheeses and pici, the famous handmade spaghetti. Rosso di Montepulciano, Vin Santo and His Majesty Vino Nobile di Montepulciano, a top-quality red wine and the first to be awarded the DOCG “Rosso di Montepulciano DOC”, complete the extraordinary range of food and wine on offer.

Today’s stage was unique in its beauty and typicality. It featured two long stretches of gravel road for a total of 25 kilometres, a first for the Giro-E if you exclude the 1,500 metres at the finish line the other day. They are called “strade bianche” (white roads) and are an excellence of this unique territory, famous among cyclists because it hosts events of international importance (such as the Strade Bianche, one of the Great Classics organised by RCS Sport, the same as the Giro d’Italia) that have the unpaved roads as their protagonists. As well as cyclists with racing ambitions, this area caters for all kinds of cyclists, including families, because it is at the centre of numerous routes of all kinds.

After 80 kilometres and 1,200 metres of positive elevation gain of pure poetry, after the white roads through the vineyards, the electric cyclists arrived at the home of the best Tuscan wine, Brunello di Montalcino. “The gravel road was a spectacle, a stage that will remain in the history of the Giro-E. I enjoyed it like crazy. I worked hard, but that healthy kind of hard work that you decide how hard it should be,” said Chechi, with the smile of a child.