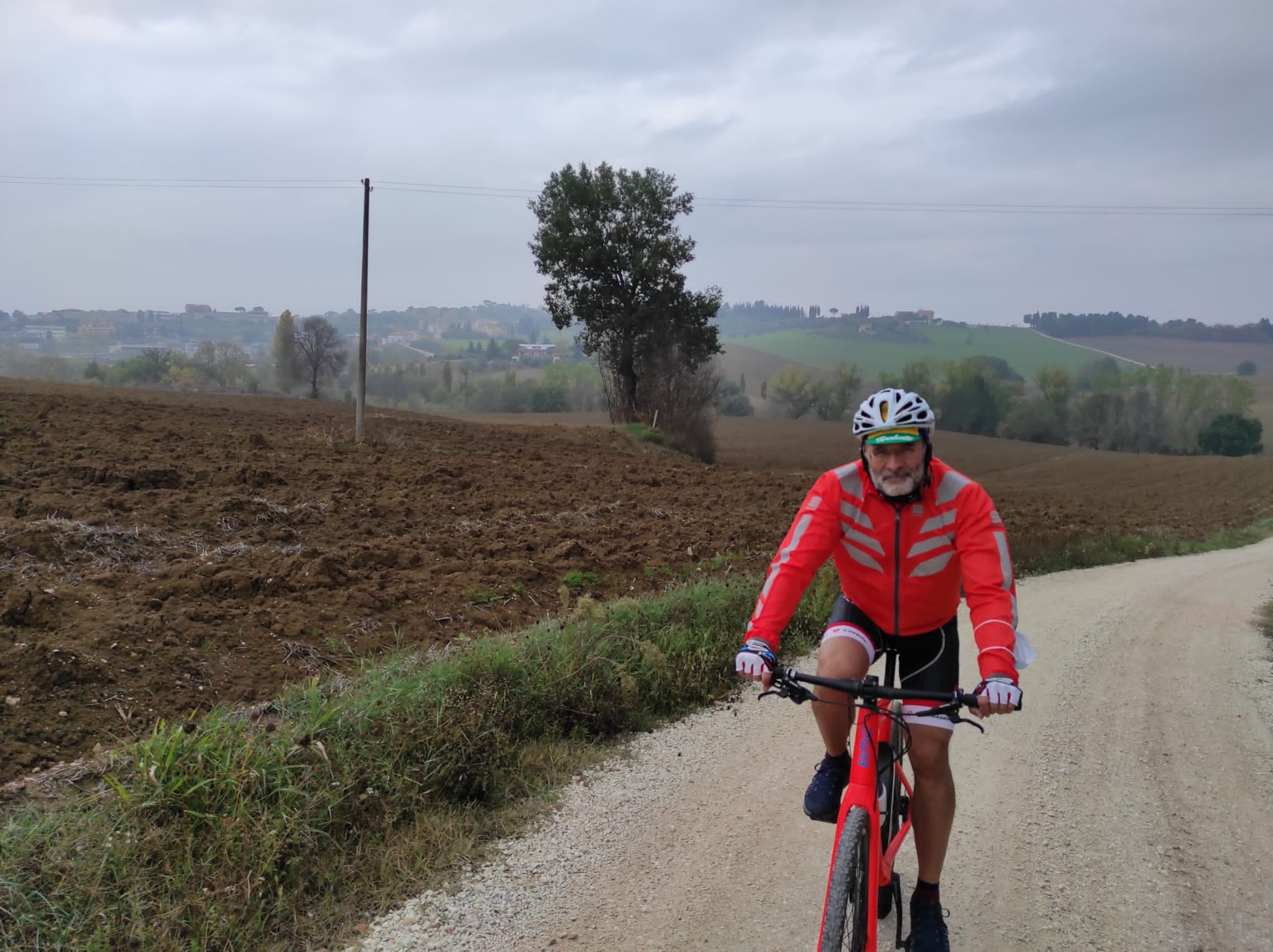 Giro-E meets Gino Cervi, who was born on the same day as Gianni Bugno (in 1964) – a Romance philologue, Coppi’s fan, a supporter of the Milan soccer team but, mostly, an intellectual of cycling in the truest sense of the word, that is to say, a writer, an editor (books, dictionaries, encyclopedias), an author at large, including  GIROglifici, the official Giro d’Italia podcast during the race itself that was created with the editorial staff of “Bidon-ciclismo allo stato liquid.” In other words, he’s quite knowledgeable about cycling, whether the matter-subject is the epic races that made the history or the current cycling facts. In this respect, he is about to begin an educational tour to discover the Marche, where he will be riding a pedal-assisted bicycle.

Cycling is a romantic sport, although it is imbued with technology, and the poetry of cycling tourism has been enhanced by the appearance of the e-bike. Doesn’t it seem strange?

“Not at all. I do believe that the e-bike is a Copernican revolution in cycling. I am not among those who regard the e-bike as a technological doping or even, as the meanest ones believe, the cycling Viagra. I really believe that it can broaden the horizons of cycling for a variety of reasons: culturally, environmentally, infrastructurally it is still a niche in Italy. I am very supportive of the e-bike. First, it is a daily transport mode that supports clever mobility, especially in urban and peri-urban contexts. It is excellent for those who live 20-30 kilometres from the city, like me. I live in Pavia and sometimes I come to work in Milan by bike. The pedal-assisted bicycle is the solution. There is also a tourism dimension to the bicycle traveler. True, riding a bike is an effortful sport, and effort is ontologically part of riding a bike, as it is tied to its history, its shape, and it is a passion you must cultivate with commitment and perseverance. However, being able to appreciate it when your athletic conditions would not allow it, or because you cannot perform as you used to because of your age, is an amazing opportunity afforded by the pedal-assisted bicycle.”

In a bicycle its aesthetic features are prevailing: current e-bikes – that used to be horrible – have become as nice as regular bicycles.

“Definitely. Bicycle means beauty, which is one of the aspects that make it attractive. In its Platonic, essential form, the bike has not changed for 150 years, as the 1885 Safety Bicycle – a bike with two same-size wheels and eight tubes forming its frame – has not changed so radically over time. The materials have changed, its technology has improved, but its shape has stayed the same. This is typical of flawless design objects that are well conceived and perfectly functional. The fact that the e-bike, when it was invented, would affect such a harmonious perfection – that nearly recalled Leonardo’s proportions with its wheels, frame, handlebar, and saddle – was bothering those who loved the bicycle, beyond its function, its being an instrument of athletic sublimation. As is always the case, human resourcefulness came to rescue the first so-called electric bicycle that nowadays looks less blatantly electric than it originally was.”

Where does your love for riding a bicycle come from?

“There are two main reasons. First, I was born in the countryside, so my early conquest of autonomy and independence was linked to my bike, which was my main transport mode even beyond aged 14, when I could have moved on to a scooter. In fact, I kept pedaling until I could drive a car, that is until I was 18. The second reason is that my mother was a cycling fan – Coppi was her hero – and my grand-father had passed on his passion– ha was a supporter of Bartali. He had my same name, although I never met him, and he was a tireless cycling fan: he would go to the Vigorelli cycle-track to see the champions racing there. Since my childhood, I remember watching the Giro d’Italia on tv at home in May.”

You are a bard of the Giro d’Italia. By the way, last May Ho fatto un Giro. Diario di una corsa fuori stagione (I did a Giro. A diary of an out-of-season race) was published. There, you talk about the only Giro that was raced in October in more than a century.

“Very humbly and possibly improperly I followed a long tradition of writing about cycling, especially the Giro d’Italia. I claim that the Giro was invented to allow journalists write about cycling races: it is not accidental that the creator of the  Giro d’Italia was a newspaper, La Gazzetta dello Sport. Competitive cycling has always gone hand in hand with writing about it – at times in a chronicle style, that is, more or less concise and impersonal accounts, at times closer to literature. Unsurprisingly, many writers took the liberty of becoming novelists or poets at the Giro d’Italia, such as Dino Buzzati, Vasco Pratolini, Alfonso Gatto. There is a story-telling dimension to cycling that contributes to its charm and is still alive, as Fabio Genovesi shows by telling the RAI spectators about a parallel Giro that is made of landscapes and stories at each route corner, on each stage. The Giro I am referring to in this book took place last October and not in May, and it was very special to talk about a de-seasonal Giro.”

A few days ago, your latest book, La fabbrica della nebbia (The fog factory) was published.

“Indeed. It came out in the “Little travel philosophy” series that celebrate ten years and invites writers or journalists to recount their own experiences. I chose to talk about the fog, because I was born in the woods of the Ticino area, and the fog was a natural element throughout my childhood and most of my adolescence. Many years later, I understood that the fog has not only to do with a weather condition. I describe my own journey in my tiny history and, mostly, in terms of the suggestions and fantasies that the fog evoke in the literature, the cinema, and even the music. Of course, the bike has to do with it, as it has always been part of me. I recall when I moved to Milan, as I sat in my saddle and chased after the fog across the southern plain. It is a different kind of fog from the one in Milan, and I missed it. In my book there is also Coppi on the Tourmalet, when he rode away from the fog and gained a remarkable lead over the rest of the peloton.”

The heavy fog of the past is gone, even in the southern plain. How does the future of the bicycle look like?

“I see it as being revolutionized by the remarkable appearance of the e-bike, even with its economic impact. In the long term, I imagine a more common and less expensive use of electric bicycles that will lead the people to get used to riding a bike again, like before the mass motorization that has locked us in those ‘wheeled tins’ that clutter the roads and prevent us from truly entering the landscapes and traveling. My hope is that the e-bike is an auspicious signal of a new season for the pedaling two wheelers”.