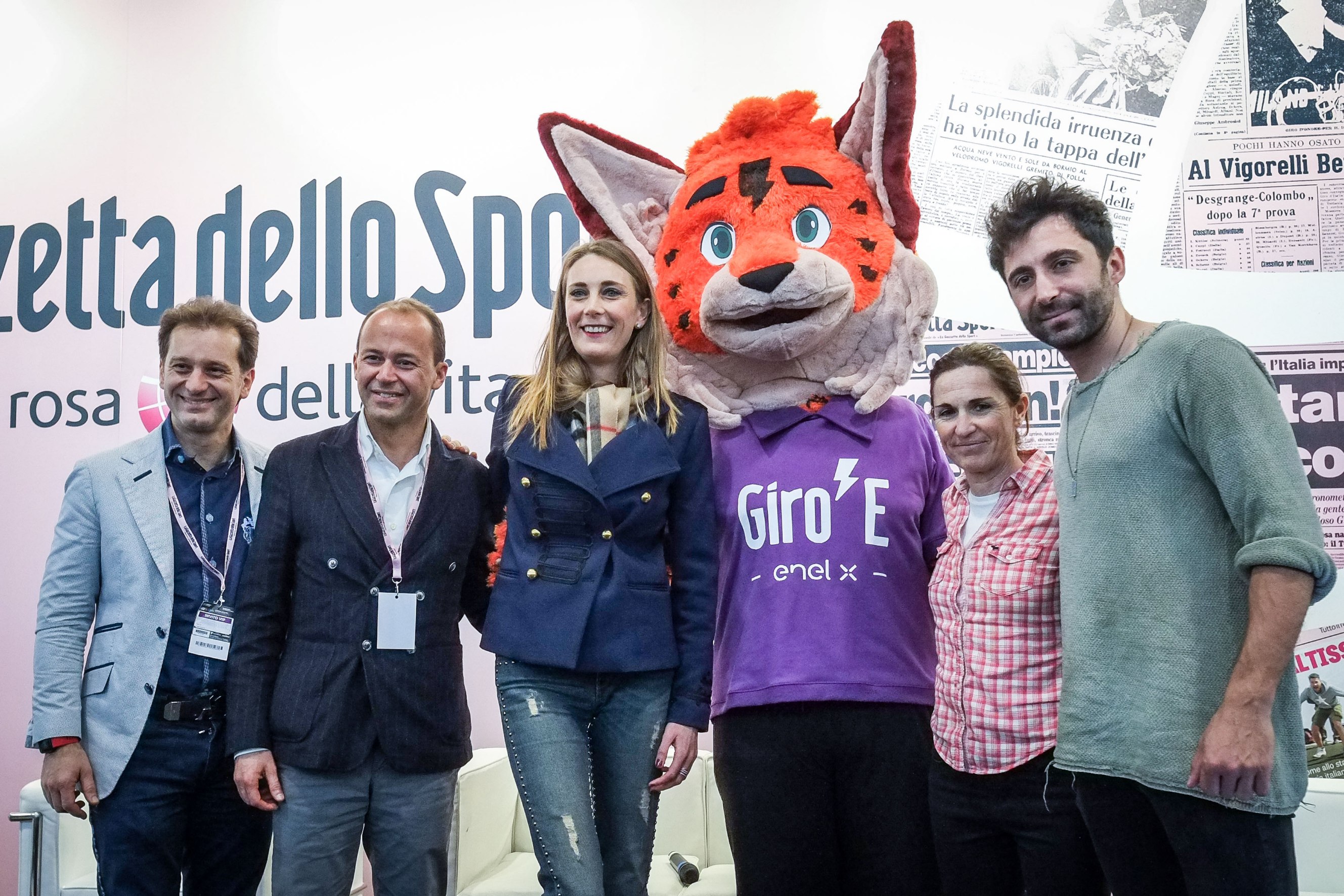 The Giro-E 2020, the only road stage event in the world dedicated to electrically-assisted bikes, was presented today at the CosmoBike Show in Verona: it’s an e-bike experience that’s ridden on the same roads and on the same days as the Giro d’Italia. Giro-E offers participants the unique emotions of the Corsa Rosa, with the signature check at the start, the public on the sides of the roads, the battle for one of the seven official jerseys, the award ceremony on the champions’ podium and the specially reserved hospitality at the finish area. And that’s all in addition to the extraordinary opportunity to pedal alongside cycling legends such as Gianni Bugno or Fabiana Luperini along with many champions of other sports.

The format, created by RCS Sport, the organiser of the Giro d’Italia, has grown from its first edition in 2018 with only one bike brand and a group limited to 20 riders to six brands and more than 500 cyclists involved in 2019.

“It’s a dizzying growth that fills us with pride and goes hand in hand with the explosion of the e-bike market,” said Paolo Bellino, CEO and General Manager of RCS Sport. “The secret? It is a unique experience because you can enjoy the Giro from within, as well as discovering the beauty of our country.” It’s all thanks to the electrically-assisted bikes, which allow everyone to overcome breathtaking climbs and make the Giro-E an exceptional test for the manufacturers.

The 2020 edition brings many updates. The number of teams involved will grow (last year there were ten, each made up of five cyclists plus the captain, to form a “group” of 60 cyclists), the length of the stages will decrease (between 63 and 114 kilometers for inline stages), and there will be two time trials (out of a total of 18 stages), along with greater attention to the teams’ energy efficiency (awarded with an special jersey) and dedicated starting cities. From Etna to Sestriere, Giro-E will be a real immersion into the world of the Giro, thanks to the chance to ride on the same roads, on the same days as the pros in the Giro d’Italia.

Starting on 12 May from Caltanissetta (to coincide with the fourth stage of the Giro d’Italia) and with its grand finale in Milan in Piazza Duomo on 31 May, there is a long road to be ridden in between, with bikes, emotions and climbs… such as the iconic Colle dell’Agnello or the 2758 meters of the Stelvio Pass, the Cima Coppi 2020, the highest peak of the Corsa Rosa. The Giro-E’s participants, even with the input from their electrically-assisted bikes, will still have to work hard, because it is never the bike that takes you to the top of the hill, but the legs and dreams of those who ride it.

Roberto Salvador, Director of the Giro-E said: “Now in its third year, the Giro-E is finding its place and its autonomy within the Giro d’Italia. We are putting in place a great organizational effort which I am convinced will bear fruit in May. The 2020 edition will offer some important news: all the stage starts, except the final stage, will be from new cities and towns, while the stage finishes will be the same as those of the professional race; the individual time trials are also new, and we are increasing the number of teams involved and introducing new jerseys including the Maglia Verde Efficienza Energetica (Green Energy Efficiency Jersey).

The Durango Team will be among those riding the Giro-E; it’s made up of former car and moto drivers, including Jarno Trulli, Marco ‘Macio’ Melandri and Thomas Biagi.

Jarno Trulli said: “I have always had a passion for cycling and have always enjoyed riding a bike. I want to thank IIvone Pinton and Rödl & Partner for this beautiful initiative that will allow us to ride on the roads of the Giro-E. I would like to ride my home stage, the one in the Abruzzo Region as I am from Pescara. In general I really like the green aspect of the Giro-E, an event devoted to the future.”

Marco Melandri said: “By cycling I have discovered a new dimension and I have a lot of fun. This year at the Giro-E I would like to do more than one stage, not just the one that arrives in Madonna di Campiglio, which is my area.”

Thomas Biagi said: “I am from Bologna and I have often cycled on the roads around there. Now this is an opportunity to get back on the saddle after a few years in which I have not cycled much. Being a driver of endurance races, I find these stages of the Giro-E very similar to races such as the 24 Hours of Le Mans where you need to be able to manage energy; both your own, and that of the vehicle.”

Fabiana Luperini, winner of five Giro d’Italia and three Tour de France: “It is a wonderful initiative because it allows ordinary people to participate in the Giro d’Italia. You face the climbs of the champions, routes that would be impossible without the assistance. Crossing the same finish line of the pros is a unique emotion. To come back 20 years later on the roads where I rode the Giro is like a dream.”

Mara Santangelo, the first Italian tennis player to conquer a Grand Slam tournament in the doubles: “The bike was one of my first loves. It is also one of the few sports that I practiced for training when I played tennis. I have it in my heart. Last year I rode two stages of the Giro-E, an incredible emotion never felt before. The scenery is wonderful, plus the public of the Giro, which is incredible. To get to Passo Rolle was not easy. The bikes are pedal-assisted, but the effort is real.”

PARTNERS OF THE 2020 EDITION