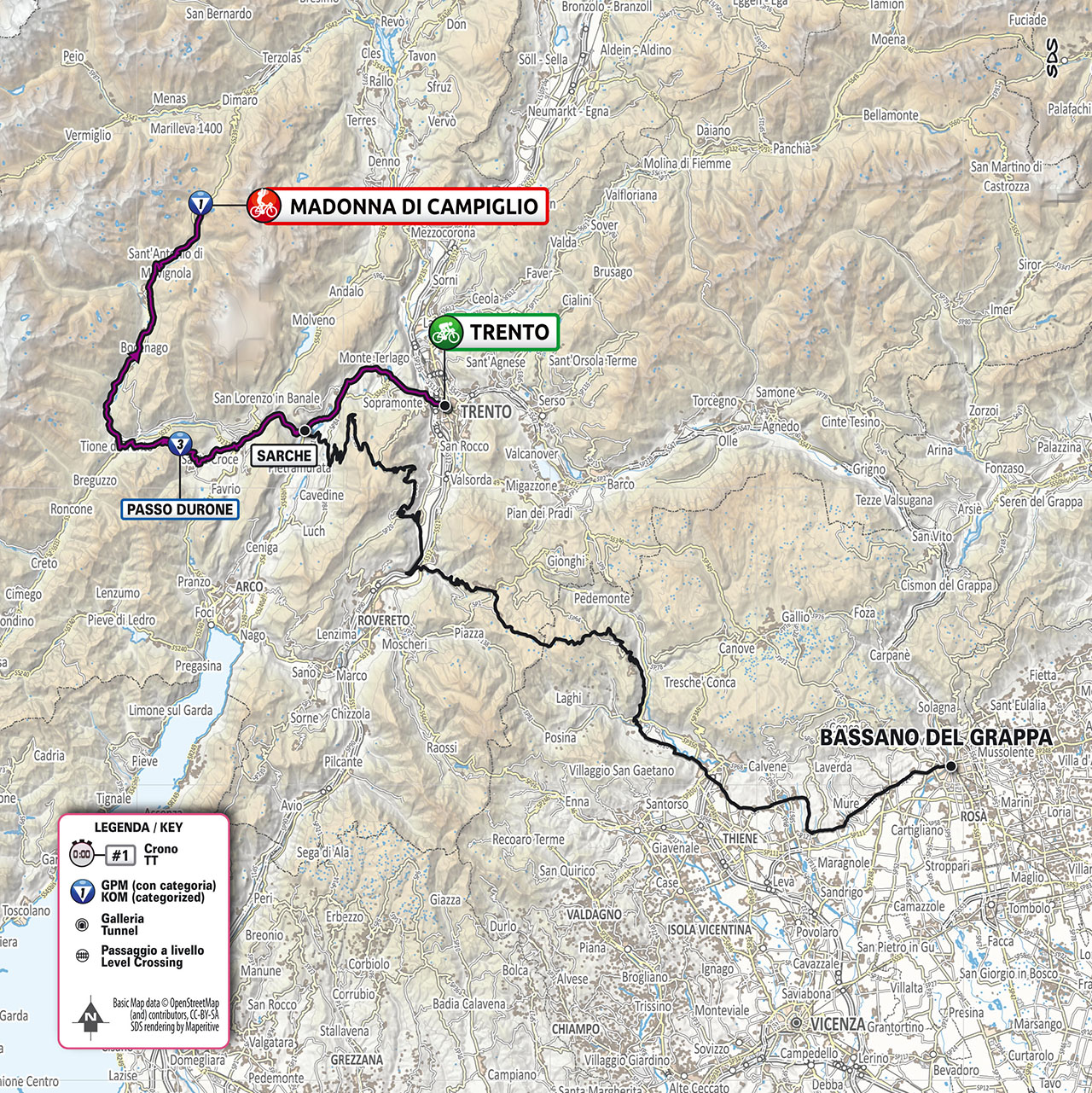 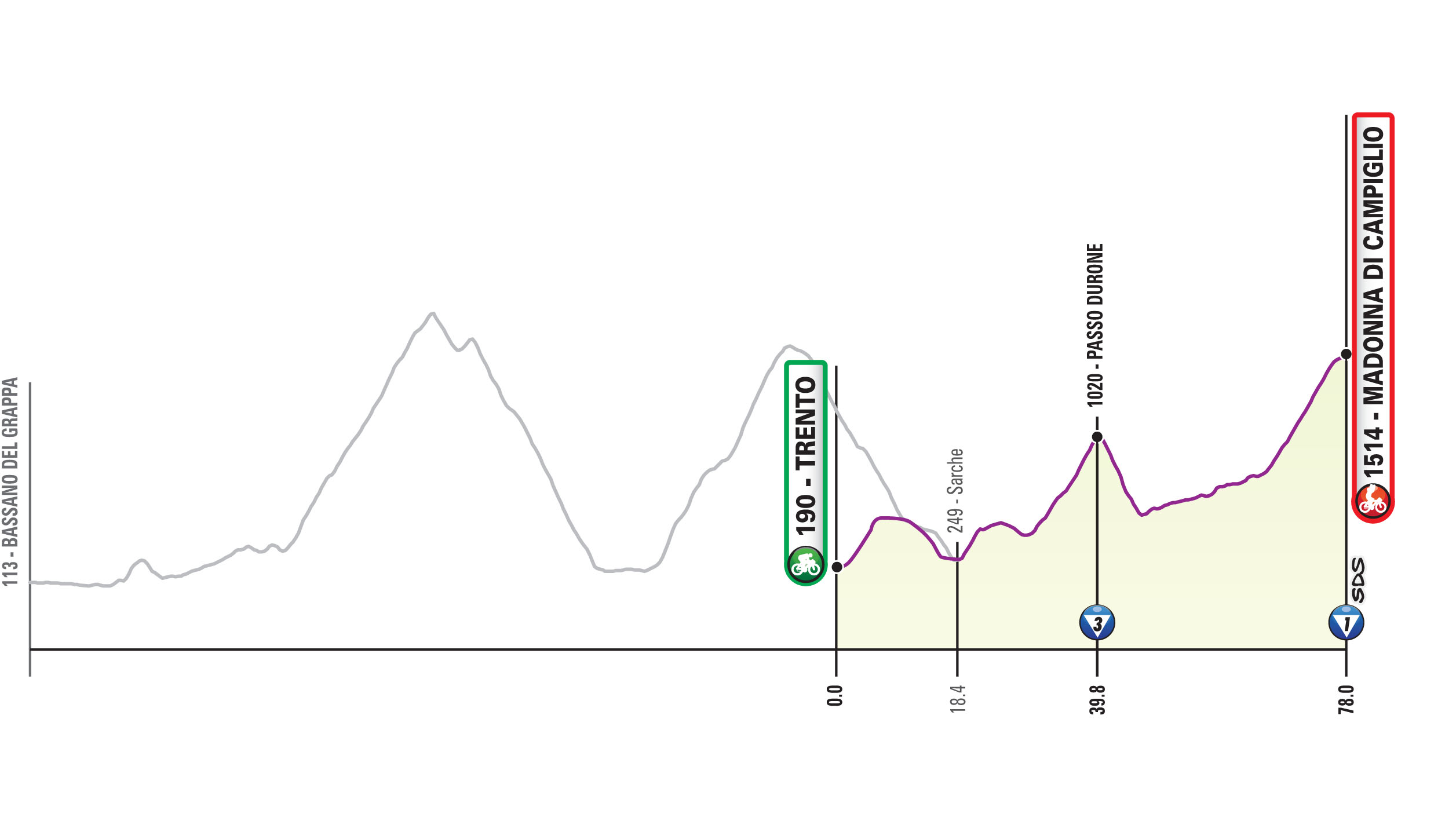 Roman treasures and Renaissance splendour living side by side in piazze, streets and palazzi, making every corner a unique wonder. This is Trento, the Alpine capital “par excellence”, which thanks to its geographical location has always been a privileged bridge between Italian culture and Central European tradition and thus a city with a thousand faces. The Roman Tridentum, conserved intact in its underground archeological site, the frescoed façades of the noble sixteenth-century palazzi in the town centre, and the Castello del Buonconsiglio, the largest monumental complex in the entire Trentino Alto Adige region, dominating the city, are only a few examples of the wonderful places you can visit. There are museums for all tastes, urban trekking itineraries in the most fascinating places, 15 excursions to discover Trento and its surroundings with routes and tips for different skill levels, and the Trento naturalistic circuit with over 400 km of cycling routes connecting it to Lake Garda and the Dolomites and 50 km of paths in the surrounding woods.
A few kilometers away from the city of Trento, Monte Bondone offers everything a nature and sports lover could desire both in the summer and winter season, surrounded by the spectacle of the Dolomites peaks and dominated by the peace and silence of the forests.
At a fifteen minute drive away from Trento is the evocative Valle dei Laghi, where the lakes are framed by a succession of castles and villages, rock walls and hills; the numerous excursion paths and meadows are ideal for relaxing walks, archeological excursions and mountain bike rides. 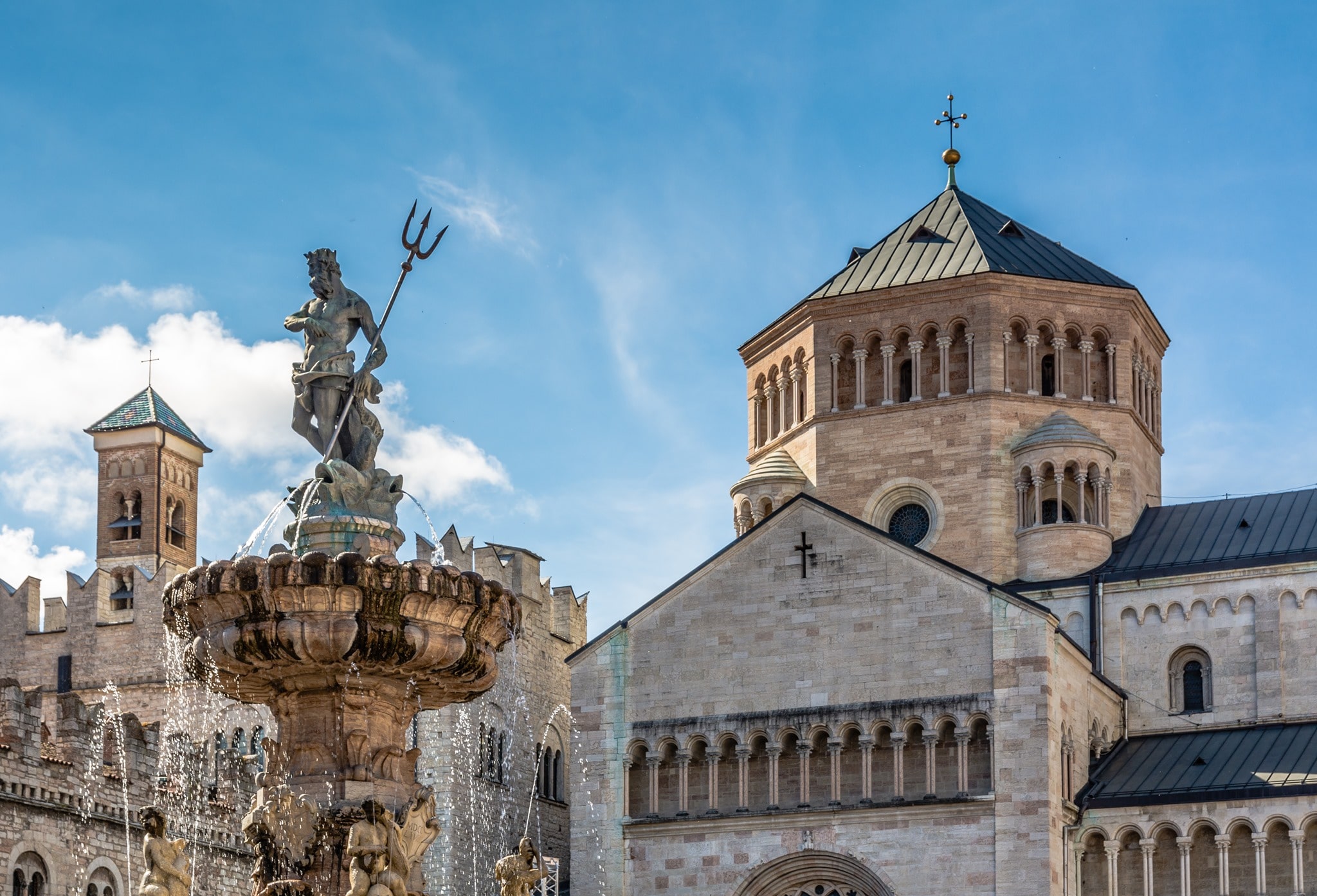 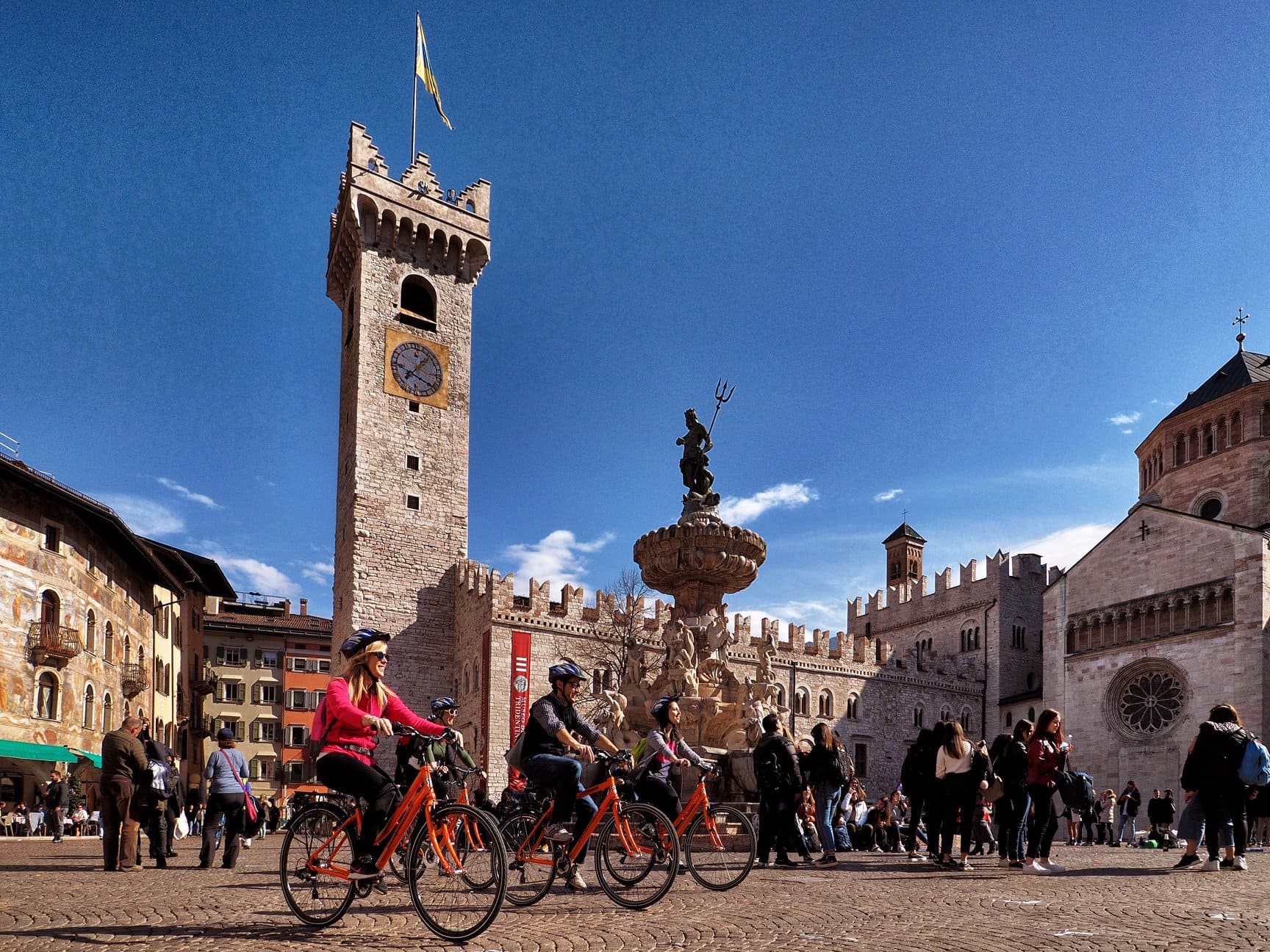 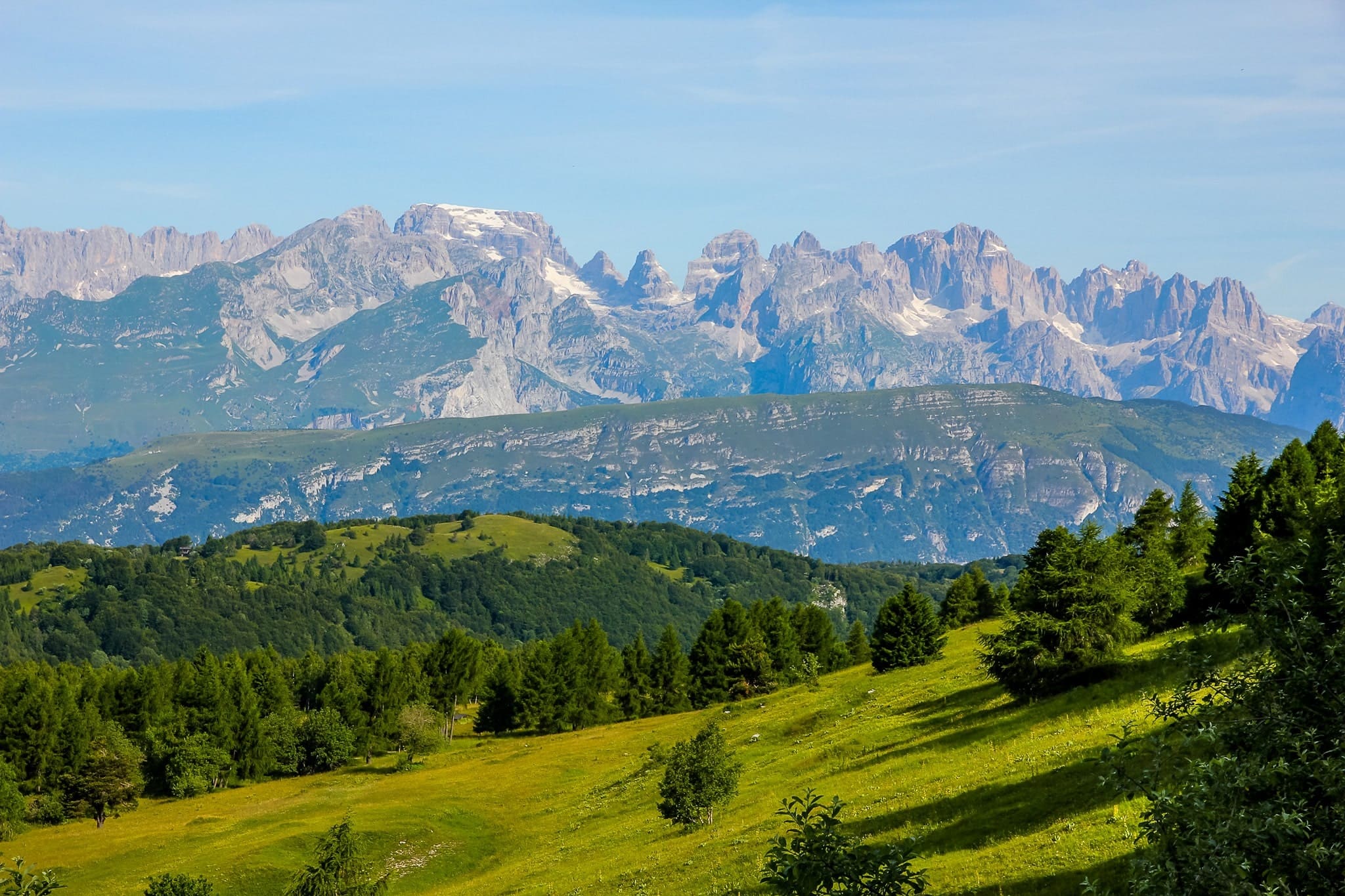 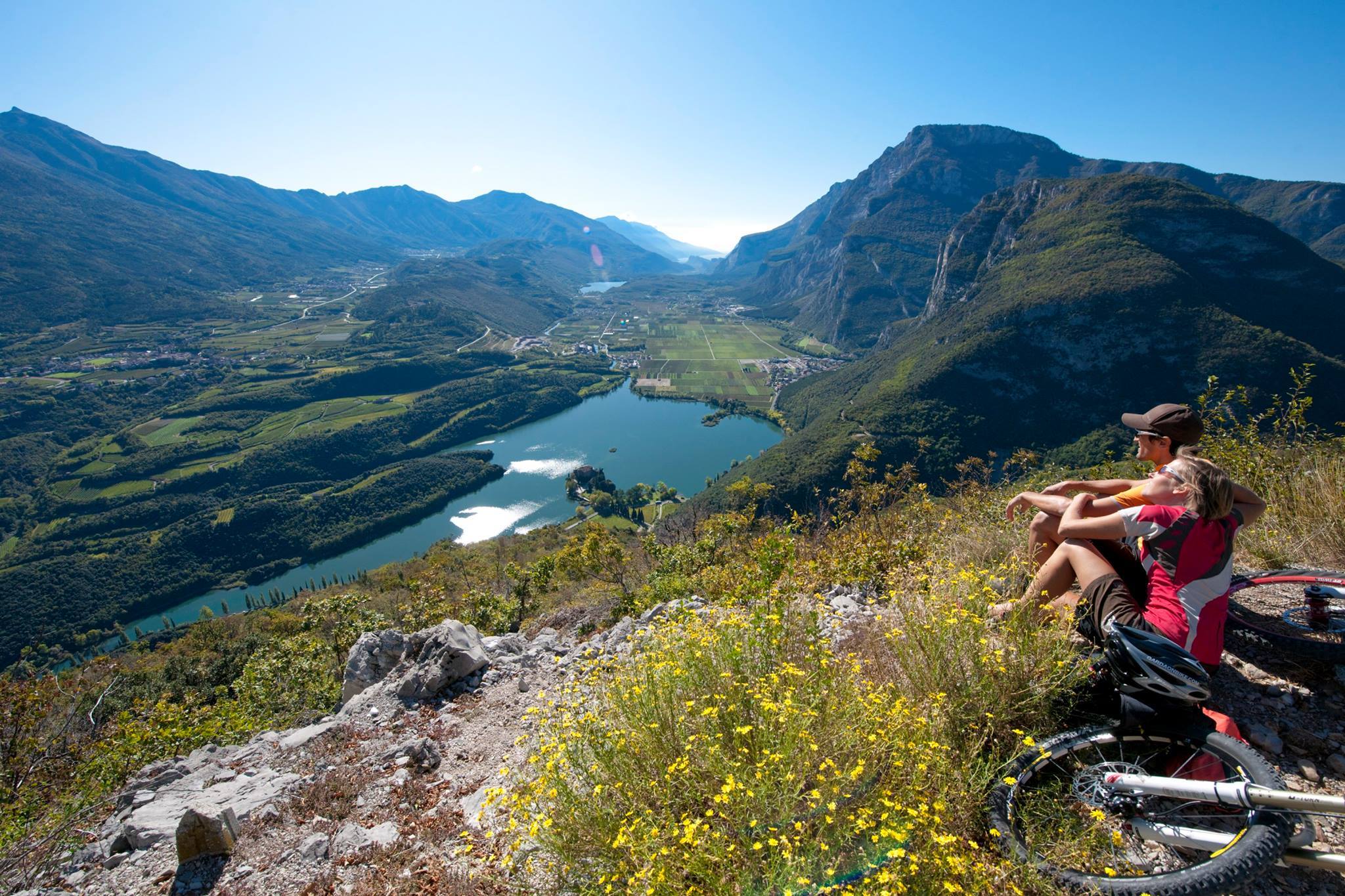 Trentino’s cuisine is a melting pot of ingredients and methods, since it is at the junction between two climates and several culinary traditions. A rich local food & wine tradition which pays particular attention to quality and ensures both the purity and authenticity of the raw ingredients.  Autenthic products like trout and char from mountain streams, Extra Vergin Olive Oil from Garda Trentino, organic vegetables, berries, Trentino’s cheese, milk product excellences and cured meat.
In Trentino, climate, soil and terrain have combined to create one of the great wine-growing regions of Europe. The local wine excellence like Trentodoc Spumante, a metodo classico sparkling wine, and Vino Nosiola, wine variety of Valle dei Laghi, with its derived products can be sipped in the many wineries of the territory. In Trento you can also discover all the food&wine specialties of the region at Palazzo Roccabruna, the Enoteca Provinciale of Trentino.

The city of Trento has a lot to offer from a cultural and artistic point of view. You can not miss the underground archeological site of Roman Tridentum, the frescoed façades of the noble sixteenth-century palazzi in the town centre, the Castello del Buonconsiglio, the Science Museum MUSE, San Vigilio Cathedral, the Diocesano Tridentino Museum, the Museo dell’Aeronautica Gianni Caproni, the Piedicastello Galleries and the Galleria Civica of Trento – Mart.
Not far from Trento the beautiful Valle dei Laghi is rich in lakes, ancient villages and medieval castles like Toblino Castle on the omonymous lake, which is surely one of the most romantic and picturesque places in Trentino. 20 minutes far from the city you can also reach Monte Bondone, which offers many possibilities for having fun and doing some sport in nature. At the Conca delle Viote it is also possible to observe the stars thanks to the astronomy observatory and to discover the alpine plant biodiversity at the Viote Alpine Botanic Garden.
The territory also hosts very important sports events like the granfondo Legendary Charly Gaul, which will be held in Trento from 6th to 8th July and is italian stage of the UCI Granfondo World Series, and the Moserissima, the historical bicycle ride of the 7th July in honour of the great champion Francesco Moser.

Madonna di Campiglio, Pinzolo and Val Rendena (western Trentino) are a mosaic of naturalistic beauties where to live a mountain experience 360° around. In these places, the alpine setting shows its best: on the east side there are the Brenta Dolomites-UNESCO World Heritage, on the west side you can admire the shiny glaciers of the Adamello and Presanella. All around, the delicate frame of the Adamello Brenta Geopark with its extraordinary richness of flora, fauna, alpine lakes, waterfalls and ancient forests populated by brown bears. Madonna di Campiglio glamour and modern, Pinzolo ideal for sports and families, the Val Rendena rural and traditional. 25 kilometers, in about 30 minutes by car, from the lowest point of Villa Rendena (600 m slm) to the highest of Madonna di Campiglio (1.550 m slm) where the mountain shows all its splendor. Places of rare beauty are the result of the winning combination between nature and man. Intense green woods expand from the mountains to the valley stopping close to the typical towns that show, at a deeper level , hidden treasures of alpine, religious and popular culture. 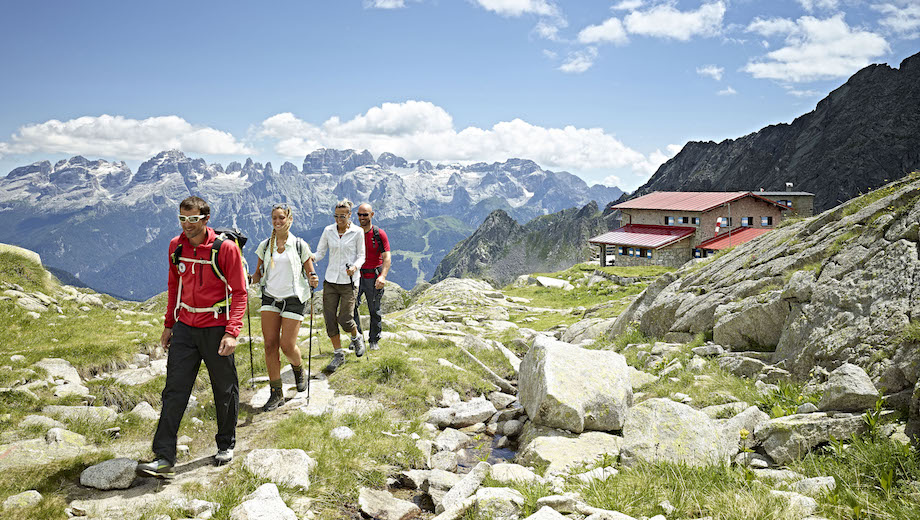 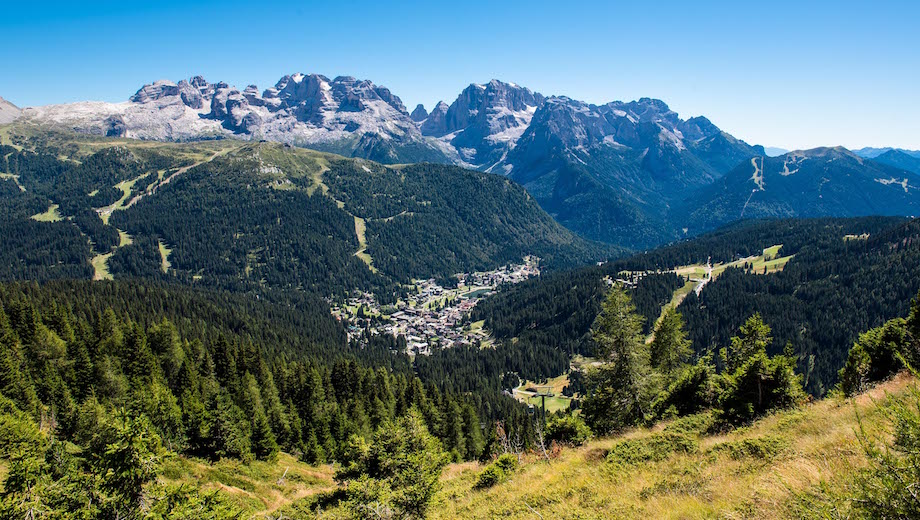 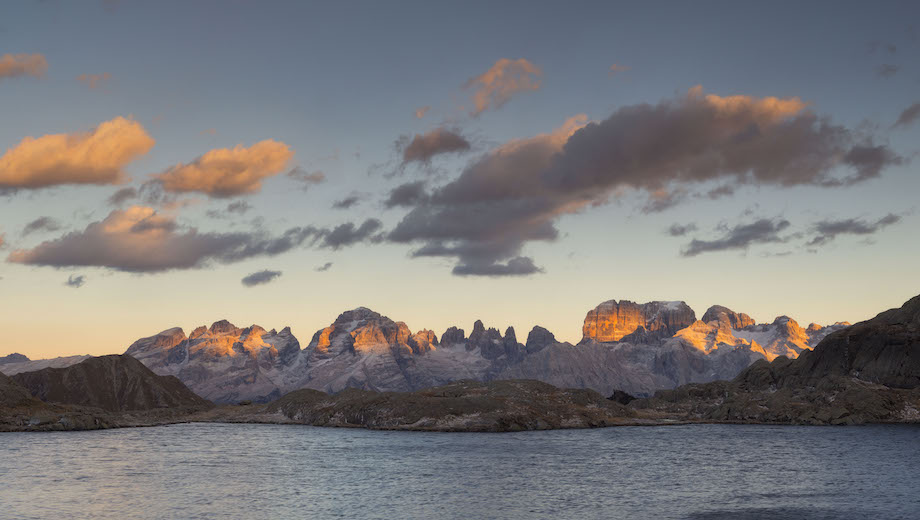 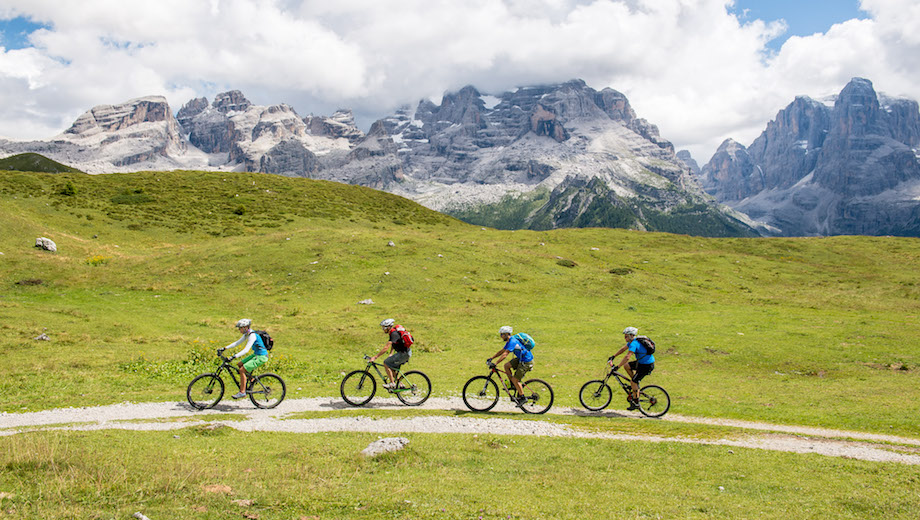 The traditional food of Val Rendena sinks its roots into a poor past and features wholesome ingredients and exquisitely authentic flavors like the cornflour for polenta, garden produce, herbs and other aromas. Sausages and cheeses, polenta, mushrooms and wild game are typical Val Rendena delicacies.
The area also features a variety of grappas flavored with wild berries and other mountain plants, such as dwarf pine and woodruff, as well as a unique spirit distilled from gentian root, which is made exclusively in the valley and it is ideal as a digestive after even the most lavish of meals.
Of particular note the cheeses of the valleys made from the milk of Rendena cows, the only breed of cattle that is native to the Trentino area and has Slow Food status.

Dolomiti di Brenta
On  2009, at the Seville Conference Center in Spain, the 21 members of the UNESCO World Council unanimously proclaimed the Dolomites’ Brenta Group to be a UNESCO World Heritage Site.
The new World Heritage Site extends to nine Dolomite groups for a total area of 142,000 hectares (over 350,000 acres), plus a buffer area of an additional 85 hectares (210 acres) for a total of 231,000 hectares (over 570,000 acres) across 5 provinces.
The announcement came at the end of a session of the World Heritage Committee in Seville, and the recognition arrived 17 years after the Dolomites’ initial candidacy for this important recognition, which includes the area among the world’s 176 natural jewels for their extraordinary beauty and specific geological features.

Adamello-Presanella mountain groups
There are some peculiarities that make Adamello and Presanella very fascinating: the Presanella mountains have 7 glaciers, while in the Trentino part of the Adamello there are 17 glaciers, among which the Mandrone glacier, the widest of the Italian Alps. Besides, Cima Presanella peak (3558 m.a.s.l.) is the higher mountain of Trentino. On Adamello ridges, between 1914 and 1918, there was the highest battle front of the Great War. Here, at 3.000 m.a.s.l., in snow and ice, the Adamello Gret War took place and today there is a museum dedicated to it in Spiazzo Rendena (20 km from Madonna di Campiglio).

Salone Hofer in Madonna di Campiglio
This prestigious feast hall is inside the Des Alpes hotel, the old alpine establishment. Its name comes from the presence of some paintings in liberty style realized by Gottfried Hofer. The big canvas on the entry wall represents the Brenta Dolomites seen by Monte Spinale mountainside: there are some children that pay homage to the sweet and humble Virgin with Child.
The painting with the vision of the Madonna on Spinale is important because its title gives us the first attestation of the name of Madonna di Campiglio, then confirmed in a monograph written in 1900 dedicated to the resort. On the opposite wall, in two medallions with the gold ground, the painter represented the faces of the Sissi Princess and the Franz Josef Emperor.

3Tre, slalom stadium in Madonna di Campiglio
“3Tre” is the World Cup slalom competition par excellence. It was born in 1948 by an idea of Rolly Marchi as an event made of three competitions (slalom, giant and downhill) and it has always kept intact its glamour and excitement.
On 18th December 2012 the “Canalone Miramonti” ski run will host again this great competition, where many international and Italian ski champions raced in the past, as Alberto Tomba, Zeno Colò, Gustav Thoni, Piero Gros, Ingemar Stemmark.

Madonna di Campiglio was born in the end of the 12th century, when an hospice with a little church was built in the Campo Carlo Magno Pass (one of the most important transit way through the Alps towards the German regions, also used according to the legend by Carlo Magno and Federico Barbarossa). From 1500 the hospice lost importance gradually, till it was bought by Giovan Battista Righi of Strembo in 1868: from that time the tourist history of Madonna di Campiglio started. Righi changed the hospice in an alpine establishment, which welcomed many guests and famous mountaineers: here the members of the Alpine Society of Trentino met for the first time, and just here SAT was founded in 1872. After some years, Righi built the connection road with Pinzolo (the present old street) at his own expense, considered one of the best ways of the Alps at that time. When he died, the activity was carried on by Franz Josef Osterreicher, who renovated and modernized the establishment, creating the Grand Hotel Des Alpes of Campiglio. This hotel welcomed the Sissi Princess in 1889 and 1894 and Franz Josef Emperor in 1894 during their holidays. Madonna di Campiglio was born as the summer tourist resort for the Central European nobility, then in 1910 a group of English skiers discovered its winter beauty, making it one of the most important ski resorts of the Alps. From that time the Pearl of the Dolomites entered in the ski history, thanks also to the great international sport events that it hosted, as the legendary 3Tre ski competition.