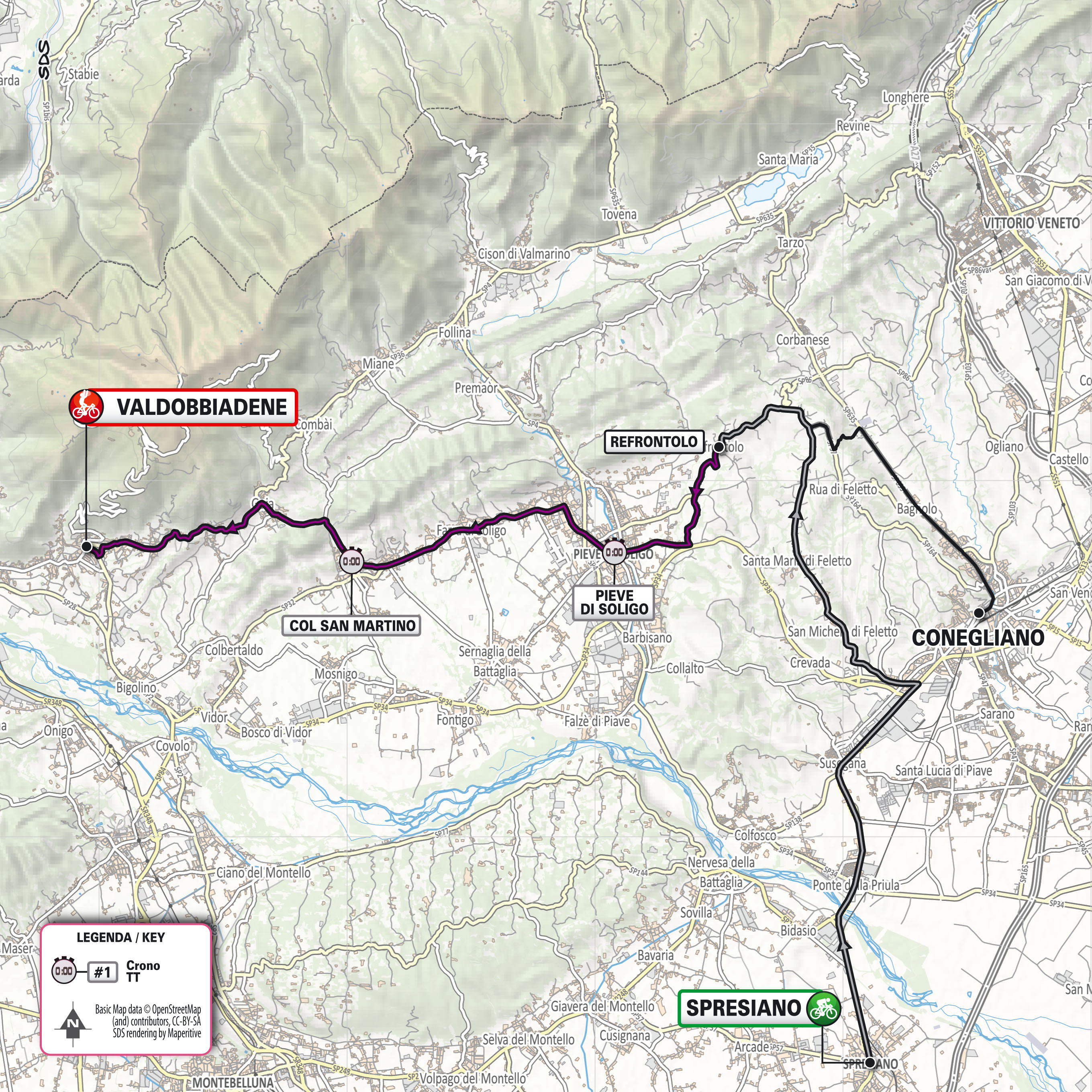 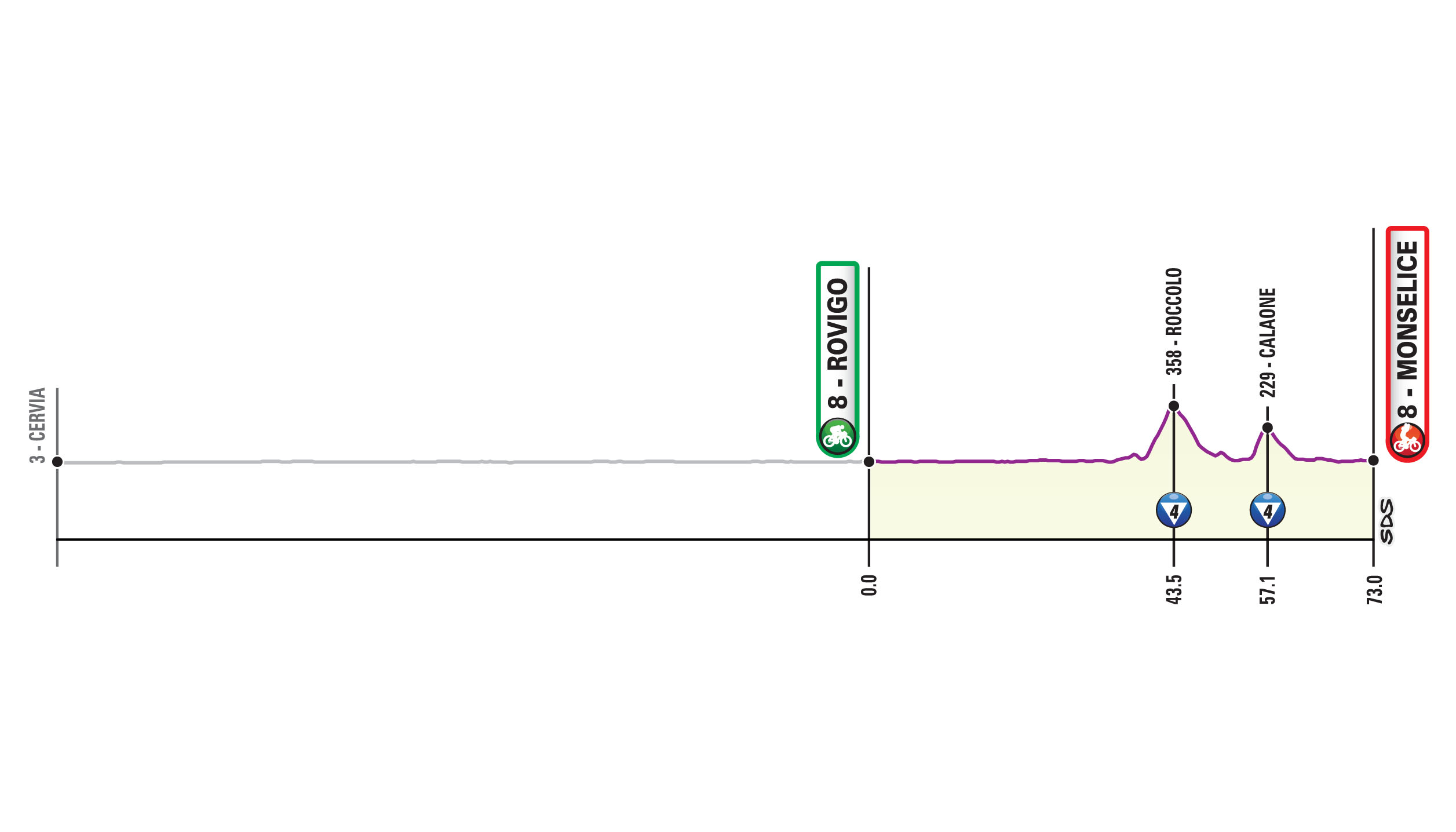 In the medieval documents the village is called in different ways: Roncum Frontulum, Ronco Frontulo, Roncofrontolo in 1128 and Refrontali in 1266. Refrontolo from 1540.The first document in which the village of Refrontolo is quoted goes back to 1075. In this document, called “Traditio Avasia”, there is a reference regarding to a Turingo, longobard, that gave to the monastery of Saints Candido e Corbiniano of Innichen and to its abbot, bishop of Frisinga, various goods including the whole benefit of the church in (Ronco Frontulo) Refrontolo and 4 farms located in the same village. The territory of Refrontolo was firstly land owned by Longobards later, in the IX century, State Property and then in the X century land of the bishop Giovanni II of Belluno. The people of Refrontolo in January 2, 1266 swore fealthy to the mayor of the Municipality of Treviso. With the decree 22.12.1807 signed by Napoleon, Refrontolo was considered for the first time an autonomous municipality. 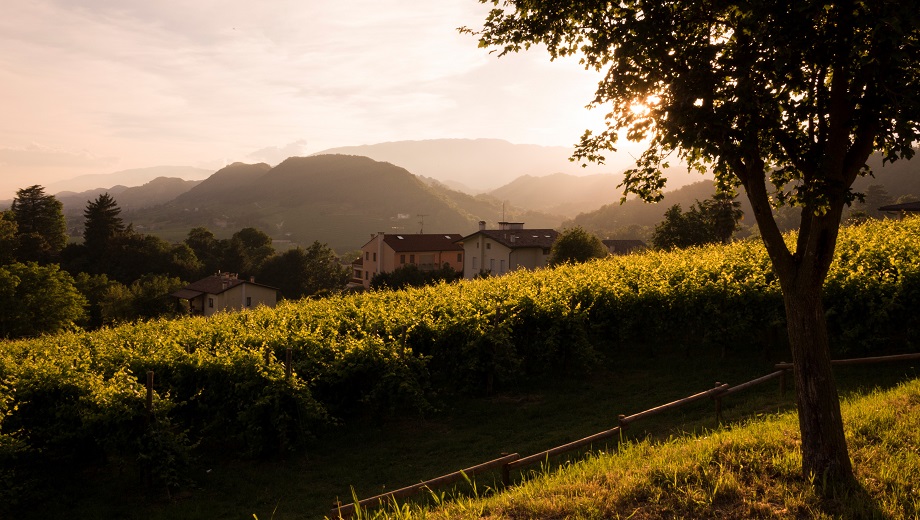 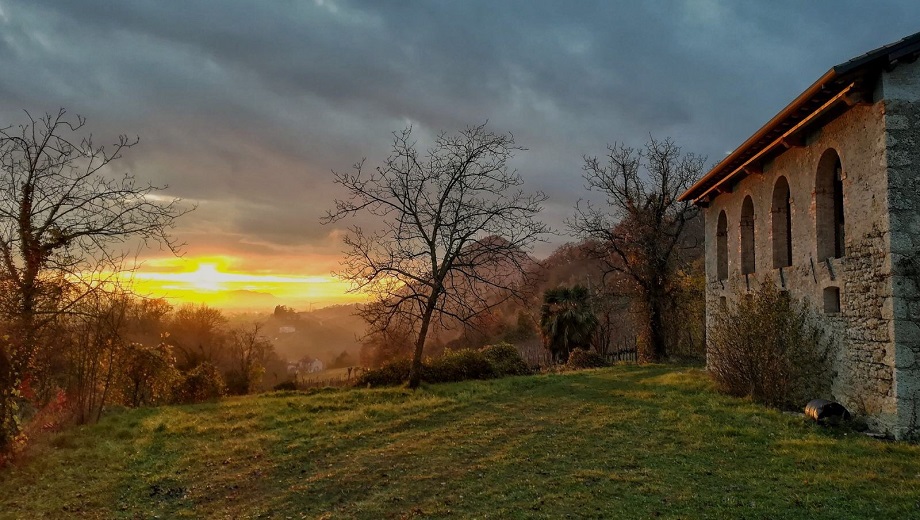 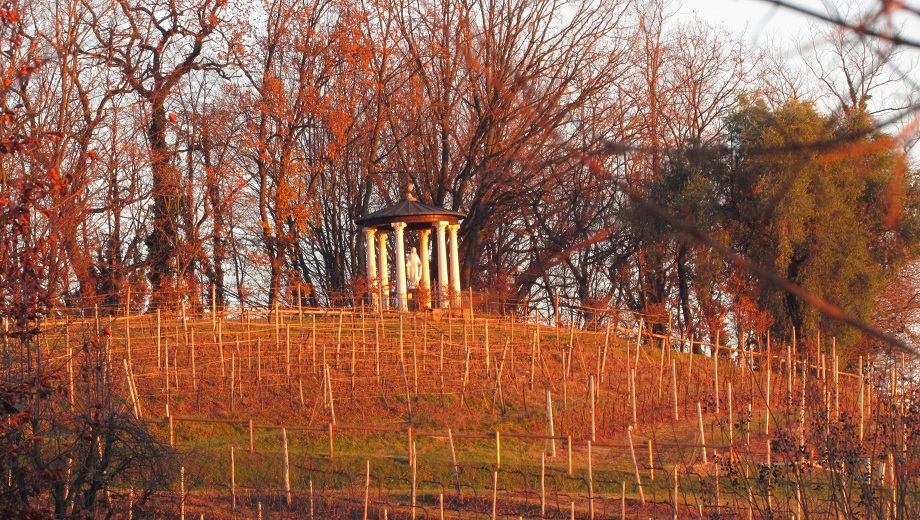 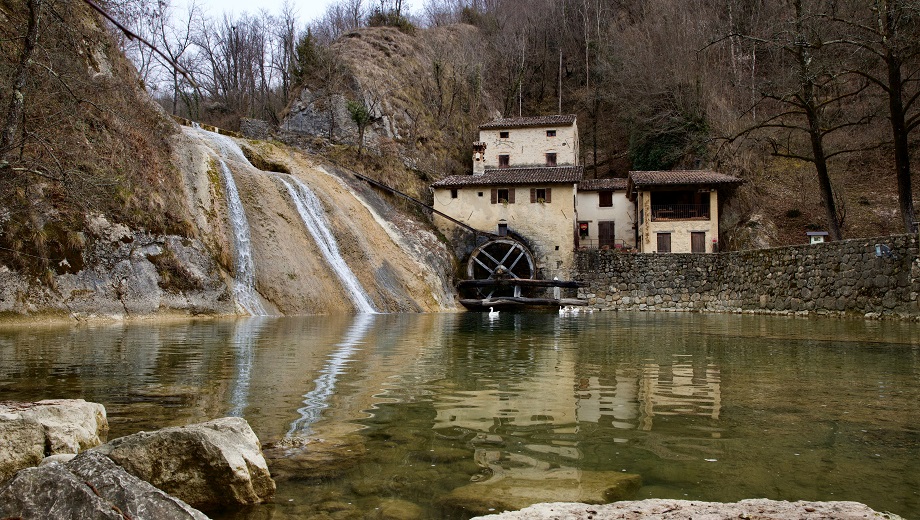 The sopressa is one of the products most rooted in the identity of Pedemontana Trevigiana. The spit of different and selected meat, roasted over slow heat for at least 5/6 hours. The Polenta produced in the ancient Molinetto della Corda from 1630. The Refrontolo Passito DOCG, achieved with Marzemino grape, it is a dessert wine, for conversation, it is a ruby-red wine with purplish tinges, pleasant sweetness, savory, rich in aromas with clear notes of blackberry and marasca cherry. It reaches 12-14 degrees.

The Symbol of Refrontolo is the Molinetto della Croda, in the Lierza Valley, represents one of the most suggestive site of the Marca Trevigiana. In its 4 centuries of history, it has inspired lots of artists and enchanted thousands of visitors. Chiesa Santa Margherita,  Tempietto Spada,  Villa Battaglia-Spada, Villa Corradini, Villa Buosi.

Refrontolo’s territory extends over a pleasant hill area with suggestive vineyard landscapes, along the valley of Crevada, and naturalistic ones on the northern part, where there is a nice trail network.

The Conegliano Valdobbiadene hills offer ideal itineraries for the tourist looking for outstanding wines and food products who also wishes to discover historic villages and attractions of amazing natural beauty. We are located in a fascinating region that can be visited at any time of the year, and which combines tradition, culture, art, wine, food and hospitality. 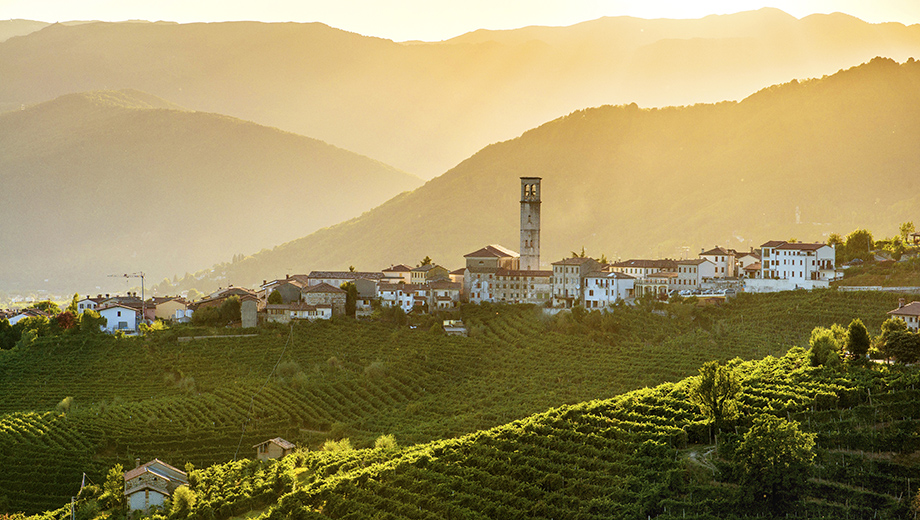 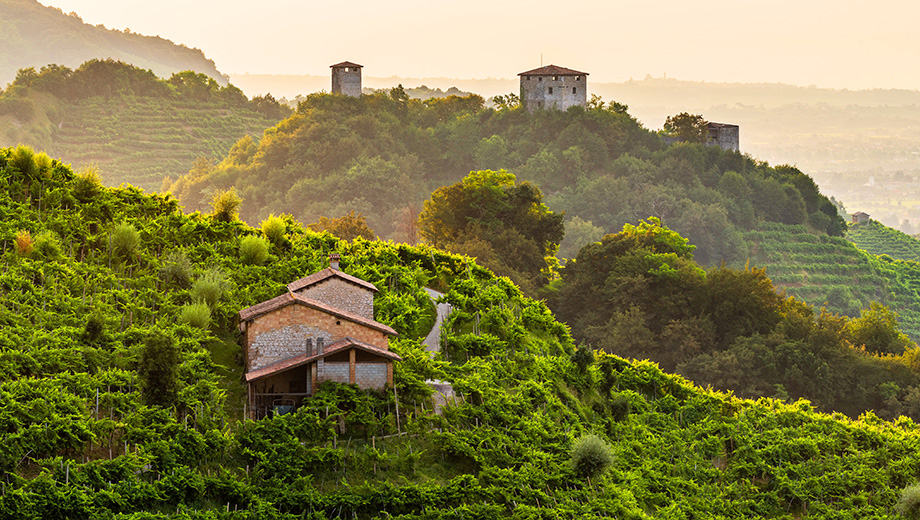 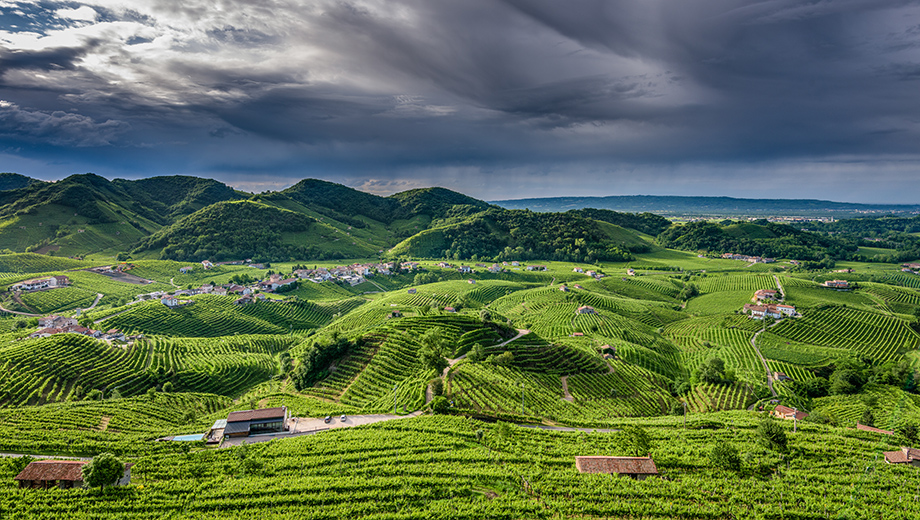 THE HISTORY OF A “SUPERIORE” DENOMINATION

The story of Prosecco Superiore DOCG began in the hills of Conegliano Valdobbiadene: a small but high-quality area lying 50 kilometres north of Venice and 100 from the Dolomites.
Here wine production dates back to ancient times, and over the course of the centuries the continuous labour of man has modified the morphology of the countryside, creating unique scenery characterized by vineyards that literally create a patchwork on its hillsides.
The success story of Conegliano Valdobbiadene Prosecco began in 1876, the year that Italy’s First School of Winemaking was founded in Conegliano. This was followed in 1923 by the Institute for Viticultural Experimentation. Thanks to these centres for study and research, the vine-growers learnt to plant vineyards high up in the hills, in particular around Valdobbiadene, where cultivating vines is defined as “heroic”: here viticulture is exhausting and difficult because of the slopes, some of which have gradients of up to 70% and which force growers to carry out vineyard operations almost exclusively by hand. Indeed, to tend these vineyards up to 800 hours’ work is required each year, compared to 150 on the plain.
In the cellar, on the other hand, the so-called Italian Method for making sparkling wines was being perfected, which calls for refermentation in autoclaves (large pressurized tanks). Thanks to the research of the School of Winemaking, this Italian or Charmat Method was fine-tuned to such a degree as to be defined as a specific technique for producing Conegliano Valdobbiadene Prosecco Superiore.
Throughout the 20th century, then, the characteristics of the two towns that embrace the zone became ever more focused: Conegliano was its “cultural” capital and Valdobbiadene its “production” capital.

In 1962 a group of 11 producers created the Consortium for the Protection of Prosecco from Conegliano Valdobbiadene, drawing up production regulations designed to safeguard the quality and image of their wines. In 1969 this Consortium obtained Denominazione di Origine Controllata status for Prosecco Superiore and in 2009 that of Denominazione di Origine Controllata e Garantita, the highest recognition of quality for Italian wines. Even in the past the producers decided to highlight the name of the region, placing before that of “Prosecco” the name of the area’s most significant towns: “Conegliano Valdobbiadene Prosecco Superiore”.
The story of the Denomination continues to the present day, urged on by its success on both the national and international markets, and it never shirks caring for the environment; Conegliano Valdobbiadene is the largest area in Europe that has banned the use of glyphosate, the most discussed chemical substance in recent years, which continues to be used in many Italian and European agricultural areas. It is the result of a long and precise synergistic work and great cooperation between local administrations of the 15 municipalities of the Denomination and the Consortium of Protection.
The result of this balance between attention to the market and that for the countryside is the entire zone’s recognized UNESCO World Heritage Site.

A typical snack in the zone is to enjoy a glass of Conegliano Valdobbiadene Prosecco Superiore with a plate of sliced cold cuts and white homemade bread. We draw your attention in particular to Ossocollo, a salami prepared with meat from the neck of the pig and Sopressa Trevigiana, a salami with soft, gently flavoured flesh.
Cheeses, whether matured or young, have always played a part in the hospitality of the Treviso area, either served simply with bread or polenta or on a cheeseboard, accompanied by a glass of wine. The most distinctive types are Morlacco del Grappa, “Formajo Imbriago” a cheese that matures in the grape pomace and the Alpine cheeses in general, particularly those from Mount Cesen. Casatella Trevigiana D.O.P. is a very traditional creamy cheese, made in the past by farmers’ wives with the small amount of milk they had available. Its name derives from the Latin “caseus” and so signifies a small round of non-matured cheese. It has a fresh, delicate, milky aroma and a gentle flavour (also reminiscent of milk) with faintly acidulous hints.
The hilly zones and mountain foothills are full of areas in which mushrooms have always proliferated: particularly popular are “i brisot” (porcini), served in a salad or sautéed, made into a sauce, cooked in oil, garlic and parsley, stewed or fried. Also much appreciated are “i ciodet”, traditionally cooked pan-fried and served with polenta, or used in sauces for serving with past a, in risottos or in soups.

The starting point for a possible route is the city of Conegliano, birthplace of the painter Cima da Conegliano (1459-1518), considered to be one of the great Masters of the Renaissance. In its historic centre the Duomo (Cathedral) is well worth a visit: it contains one of the artist’s most famous works, the “Madonna and Child Enthroned with Angels and Saints”.
Of the façade of the Duomo one can only glimpse a cross that rises from the roof, because the rest is covered by the building known as the Scuola dei Battuti, which is to all intents and purposes an integral part of the ecclesiastical complex: together they constitute a centre for art that boasts some of the most important paintings in the whole of the Conegliano area.
The point of reference for the history of winemaking in the zone is the School of Oenology in Conegliano, which has been declared a national monument. Together with the adjacent Bottega del Vino, a venue dedicated to tasting built in 1927 according to the plans of engineer Bernardo Carpené, and the Manzoni Museum, it constitutes a place where wine enthusiasts and visitors to the area can learn more about the local product.
Another stop of particular interest is Susegana, site of the Castello di San Salvatore, an ancient fortress from the 14th century, standing on a hill with a panoramic view. In May of every year, the rooms of this historic building host the most important event devoted to the wines of the Conegliano Valdobbiadene DOCG: “Vino in Villa”.
At San Pietro di Feletto there is one of Italy’s oldest parish churches: its architecture is simple and austere, but it has a large frescoed portico and a mediaeval bell-tower. Around the commune of Refrontolo vineyards. As well as Conegliano Valdobbiadene DOCG, in this particular zone another high-quality wine is produced: Refrontolo Passito DOCG, which has a ruby red colour with purplish highlights.
Of particular interest here is the Molinetto della Croda, built in the early 1600s, whose impressive millwheel is still preserved today. Continuing along the valley you arrive, finally, in Vittorio Veneto: the “city of victory” against the Austrians in the Great War, to which the “Museo della Battaglia” is devoted.

Conegliano: the gateway to the UNESCO World Heritage Site
Conegliano is a walled town built around its medieval castle, whose Renaissance splendour is still etched in its noble palaces and painted façades. The town of Conegliano today is home to 35,000 inhabitants.
For the Republic of Venice, which dominated these lands for over four centuries, Conegliano was “San Marco’s Winery”, with its gentle vineyard hills which rise up where the plain and mountains meet.
Starting with the origin of this town’s name, legend has it that it takes its name from a Trojan refugee, Giano. After many a long journey, he settled here and founded Conegliano: the name being a contraction of the expression Colle di Giano (The Hills of Giano). Still today the hill on which the historic centre sits, overlooked by the castle, is known by this name. This view is immortalized in the background scene of the landscape painting Sant’Elena, a renowned work by the celebrated local painter Cima da Conegliano. In the middle ages a collection of the town’s noble landowners formed a consortium, and built many of their residences along the town’s most famous street: Via XX Settembre, with palaces dating from the 15th and 16th centuries, and some of the frescoes that embellished them can still be seen today.
In 1337 the town became part of the Venetian Republic, two years earlier than Treviso. Over the centuries that followed, until the fall of the Serenissima in 1797, the town was relatively happy, and its prosperity grew, with the building of churches, palaces, and artisans’ workshops and factories, focused in particular on the production of textiles. It was in this context that Conegliano’s unique identity began to take shape, through the development of academies set up at the behest of the ruling gentry to promote the sciences and arts.