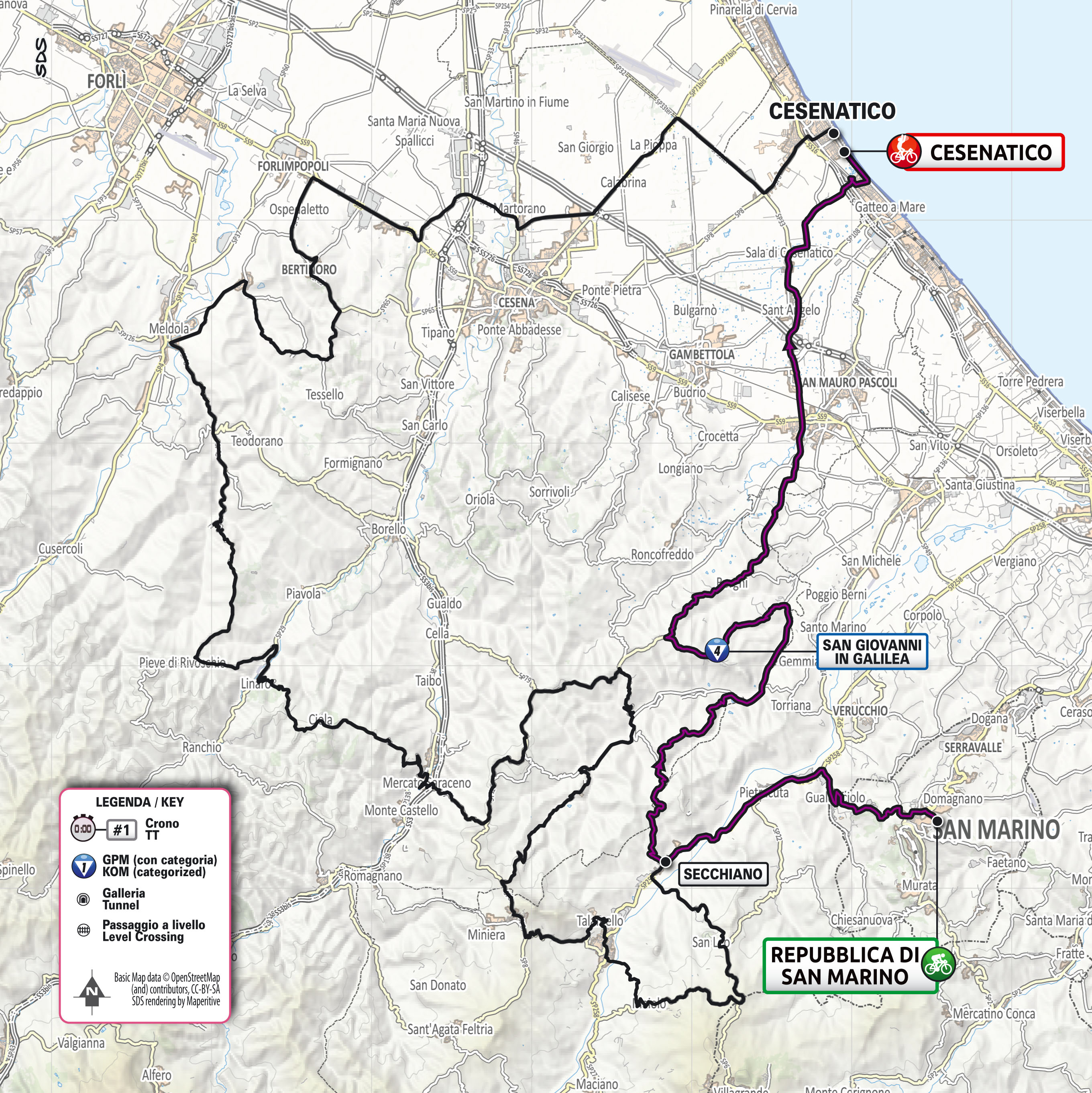 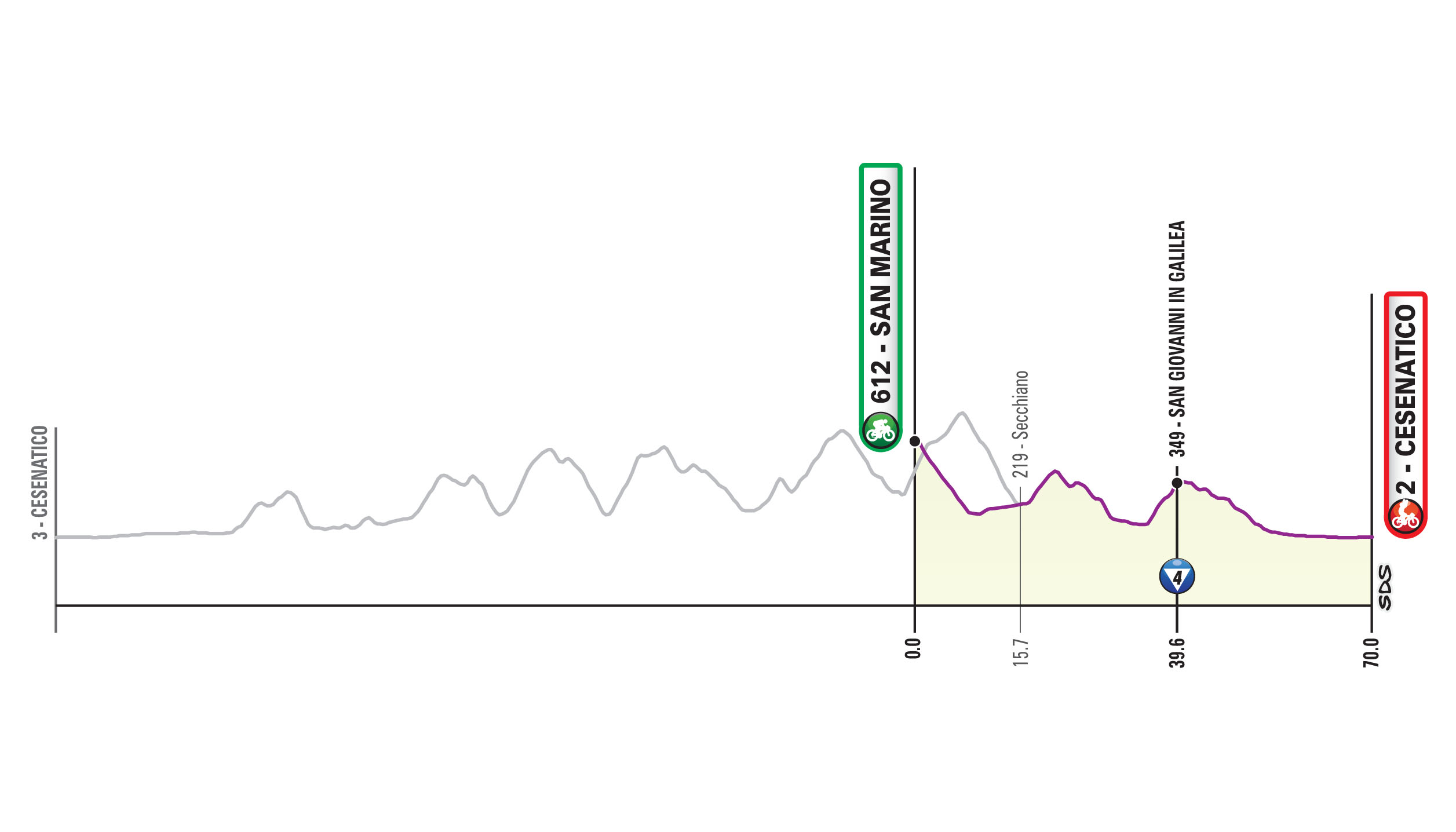 San Marino is the ideal destination for those who love nature and active holidays. Full of trails and paths to bediscovered on foot or on a comfortable ebike, accompanied by an expert guide, San Marino offers significant points of naturalistic and panoramic interest, allowing you to admire Mount Titano at 360 degrees. 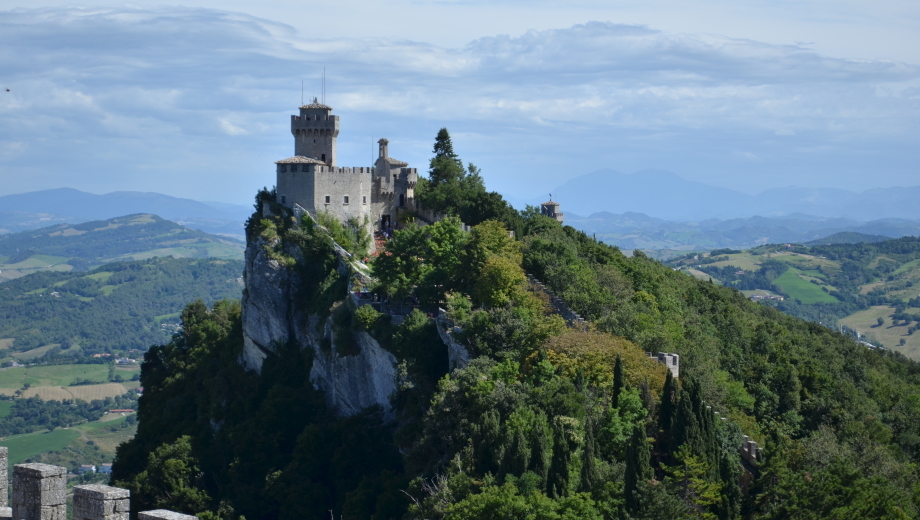 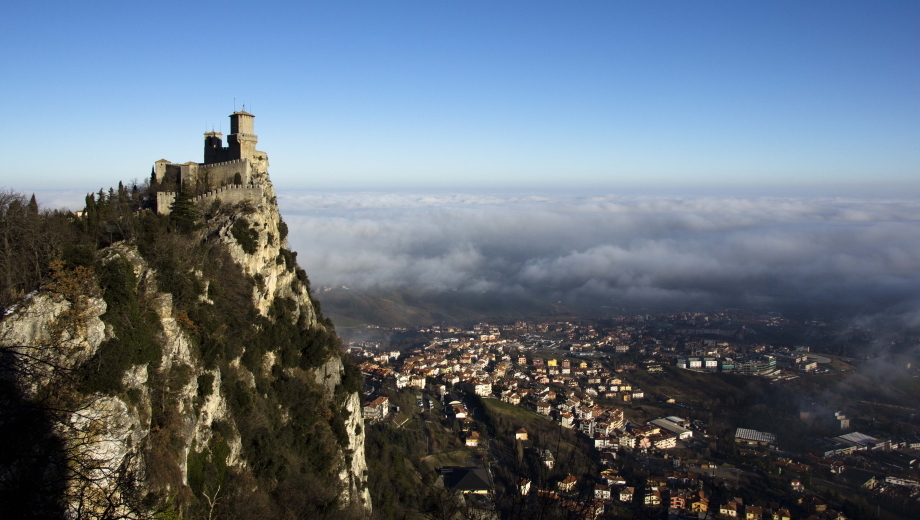 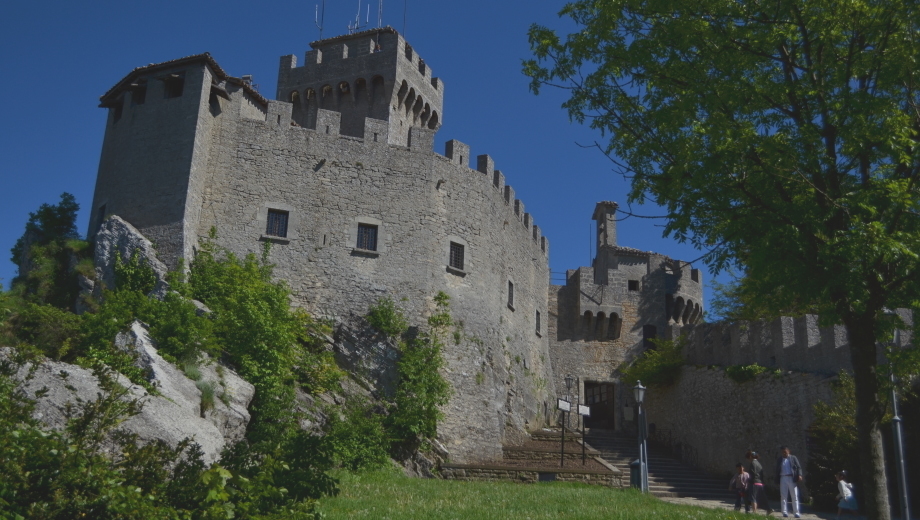 The Republic of San Marino is wonderful to experience all year round thanks to unmissable events and exclusive experiences. Its cultural tradition and values ​​of freedom have remained unchanged over the centuries, which is why UNESCO has included the historic centers of San Marino and Borgo Maggiore and Mount Titano in the list of Protected Heritage. There are many attractions, including the three Towers, the Basilica of the Saint, Saint Peter’s Church, the Saint Francis Museum, the State Museum and the Modern and Contemporary Art Gallery. In the beautiful setting of Piazza della Libertà you can admire the Palazzo Pubblico, seat of the Great and General Council, where the Changing of the Guard takes place.

The renowned seaside resort of Cesenatico lies on the Adriatic Riviera, between Ravenna and Rimini.
Cesenatico welcomes tourists along a marvellous 7-km strip of sandy beach that starts under the cool shade of the pine trees in Zadina. Here, a thick forest skirts the seafront, before reaching the picturesque old town, crossed by the Harbour designed by Leonardo, the real hub of the town life. And then, the journey carries on southwards to the residential areas of Valverde and Villamarina with their modern hotel facilities, which come alive especially during summer.
Cosy, quiet and safe beaches, wide avenues and extensive green areas where to enjoy your holidays in a relaxing atmosphere. And then the old town, with its picturesque squares, the coloured sails of the old boats harboured at the Maritime Museum and the typical restaurants that keep alive the tradition of the old fishing village… This is but a small part of the treasures that tourists will find in Cesenatico! 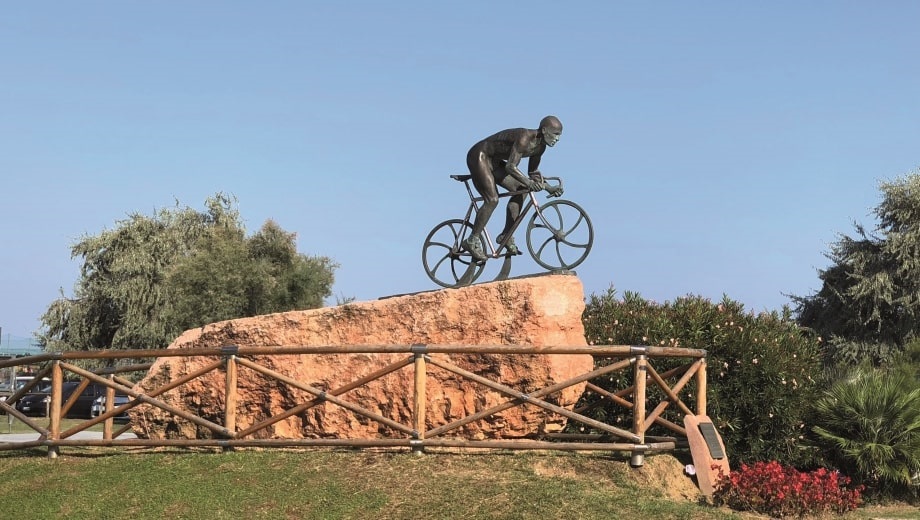 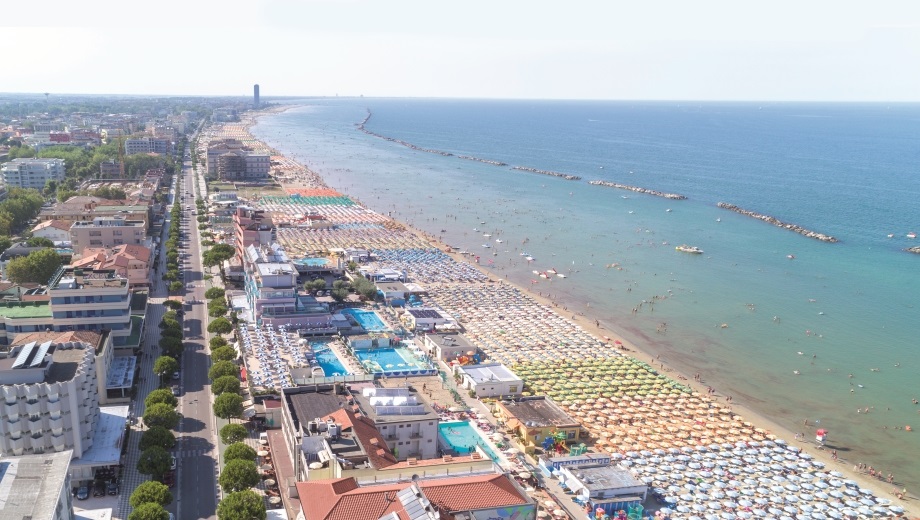 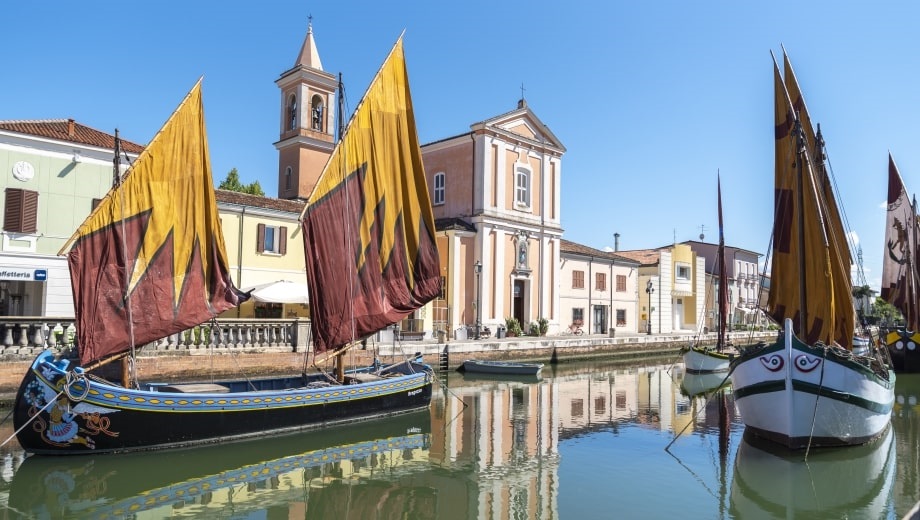 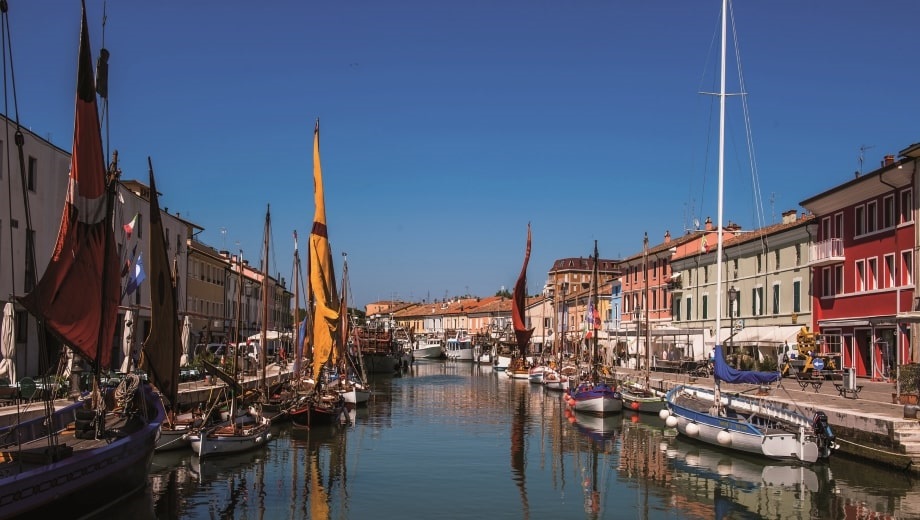 Local cuisine has its roots in ancient seafaring tradition. Along the quays in the old fishing village of Cesenatico, excellent restaurants supplied daily with fresh fish prepare delicious dishes according to the best traditional recipes, often meeting with a touch of innovation.
Cesenatico has been included in a triad of towns at the top of Italian food tradition, thus becoming an ideal destination for food & wine lovers. In addition to fine restaurants, numerous trattorias, bars and pizzerias provide a varied culinary offer, always marked by genuine food. When staying in Cesenatico do not forget to taste the delicious piadina, a typical flatbread on the tables of the Romagna people, skilfully prepared at the typical kiosks found at every street corner.

Leonardo’s Harbour. At the heart of Cesenatico is Leonardo’s Harbour, which owes its name to a historical event that in 1502 saw Leonardo da Vinci commissioned by Cesare Borgia to draw perspective designs of the port of Cesenatico. When walking along the quays, take your time to visit the many monuments and places of interest: Piazza Pisacane, with the monument to Giuseppe Garibaldi, the Fish Market, dating back to the beginning of the 20th century, a charming square called Piazza delle Conserve, and the remains of the original docks on stilts.
Piazza delle Conserve. Only a few steps away from Leonardo’s Harbour you will come across the charming Piazza delle Conserve. This little square owes its name to the presence of ancient and well preserved conical wells that were formerly used for the preservation of fish and food products, chilled by ice or compressed snow collected in the ditches.
The House Museum “Marino Moretti”. The Moretti Museum was home to the Italian writer and poet Marino Moretti. The house was then donated to the town of Cesenatico, together with original furniture, library and archives with Moretti’s manuscripts and letters, with the purpose of providing visitors with a museum where to ideally retrace the history of 20th century Italian literature, accompanied by one of its most memorable protagonists.
Maritime Museum. The Maritime Museum invites you to a comprehensive and fascinating tour dedicated to traditional seamanship in the upper and middle Adriatic Sea. As the tour unwinds around the trabaccolo and the bragozzo, two large vessels on display in the centre of the hall, take your time to admire the many interesting historical artefacts, the information panels and the 3D animations describing the structure of traditional fishing boats and their propulsion and steering systems. The museum also offers a unique attraction called the ‘Floating Museum’: moored in the harbour channel are ten traditional boats with their brightly coloured sails called ‘vele al terzo’, marked with the symbols of the fishermen’s families.
Town’s Antiquarium. In a building adjacent to the Maritime Museum, this small but interesting historical and archaeological museum tells of the daily life of the region at the time of the ancient Romans. Among the many archaeological finds on display, particularly worthy of note are the two valuable fragmentary statues of Daedalus and Icarus.
Pantani Area. This recently-reopened multimedia museum is a tour through the life and career of the ‘Pirate’, the professional racing cyclist Marco Pantani. Photos, memorabilia and audio-visual materials are on display here.
The Skyscraper. This 33-storeys skyscraper built in 1958 held the record of tallest building in Europe for a long time with its 115 metres.

The first settlements in the surrounding area date back to the Roman times as shown by archaeological finds as well as by the remains of a furnace that is thought to have been active since the second century BC. Ancient routes also attest to the presence in this area of a small staging post, called Ad Novas, which survived even after the fall of the Roman Empire. Cesenatico was founded at the beginning of the 14th century as a port to the town of Cesena, then developing as a trading and fishing centre. Starting from the end of the 19th century, Cesenatico became a tourist attraction of great importance in the area.