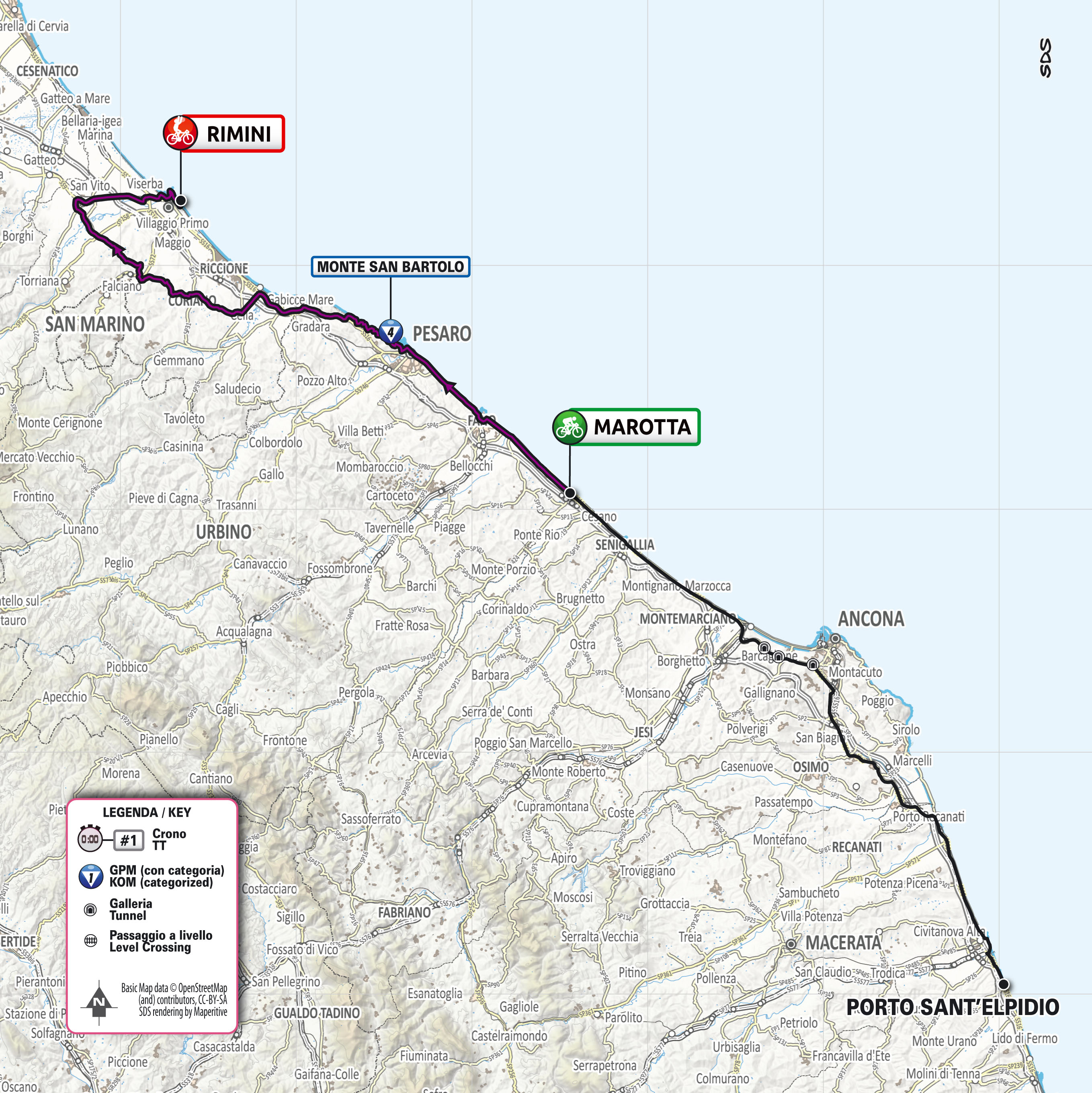 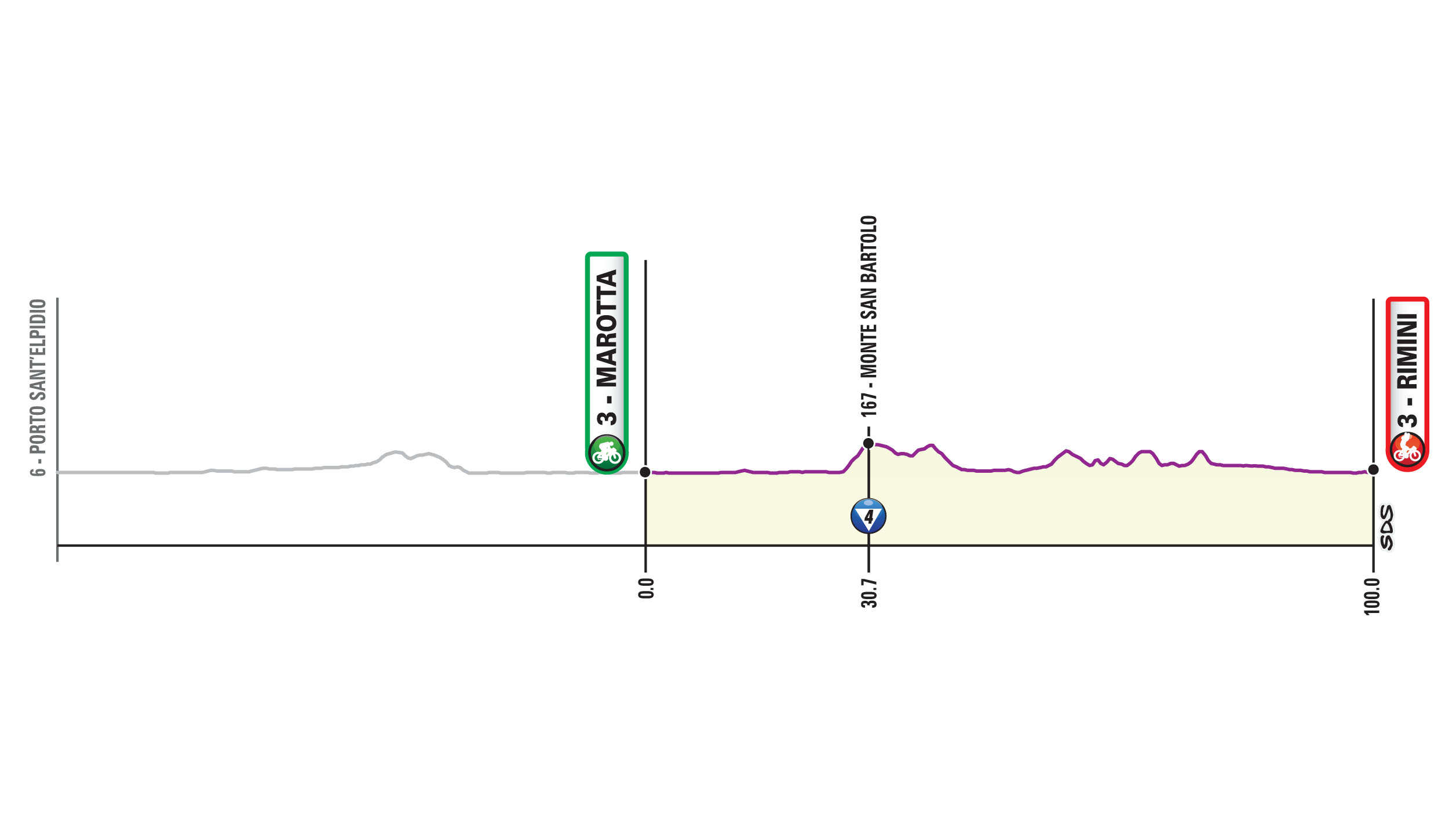 Welcome to the land of “Two holidays in one”. A fishy Adriatic sea that goes from gentian blue to turquoise, to liquid blue, in a promise to go for hills between dilated horizons and straight lines, browned by the gold of the wheat, the sun and the grapes of the vineyards: here are the colors of Mondolfo and Marotta, this is the origin of the history of a town.
The blue and gold municipal banner that flutters in the wind summarizes the events of an ancient castle, built at the decline of the Roman Empire to guard the mouth of the Cesano river, in that stretch of coastline that separates the Senigallia and Fano coast and then enters , towards the mountains, towards the Catria massif.
They are farmers and fishermen, those who reside within the double curtain wall of Mondolfo, they are noble landowners and men dedicated to weapons, who watch over the coast at the Marotta tavern so that the Ottomans do not land in force, to make so much feared raids, and because anyone who pays the gabelle while passing through the territory of the Dukes.

Inhabitants: Marotta and Mondolfo, a town of 14 358 inhabitants
Ancient name: Mala Rupta
Foundation: Since Roman times and the sixteenth century where documented activities are born. 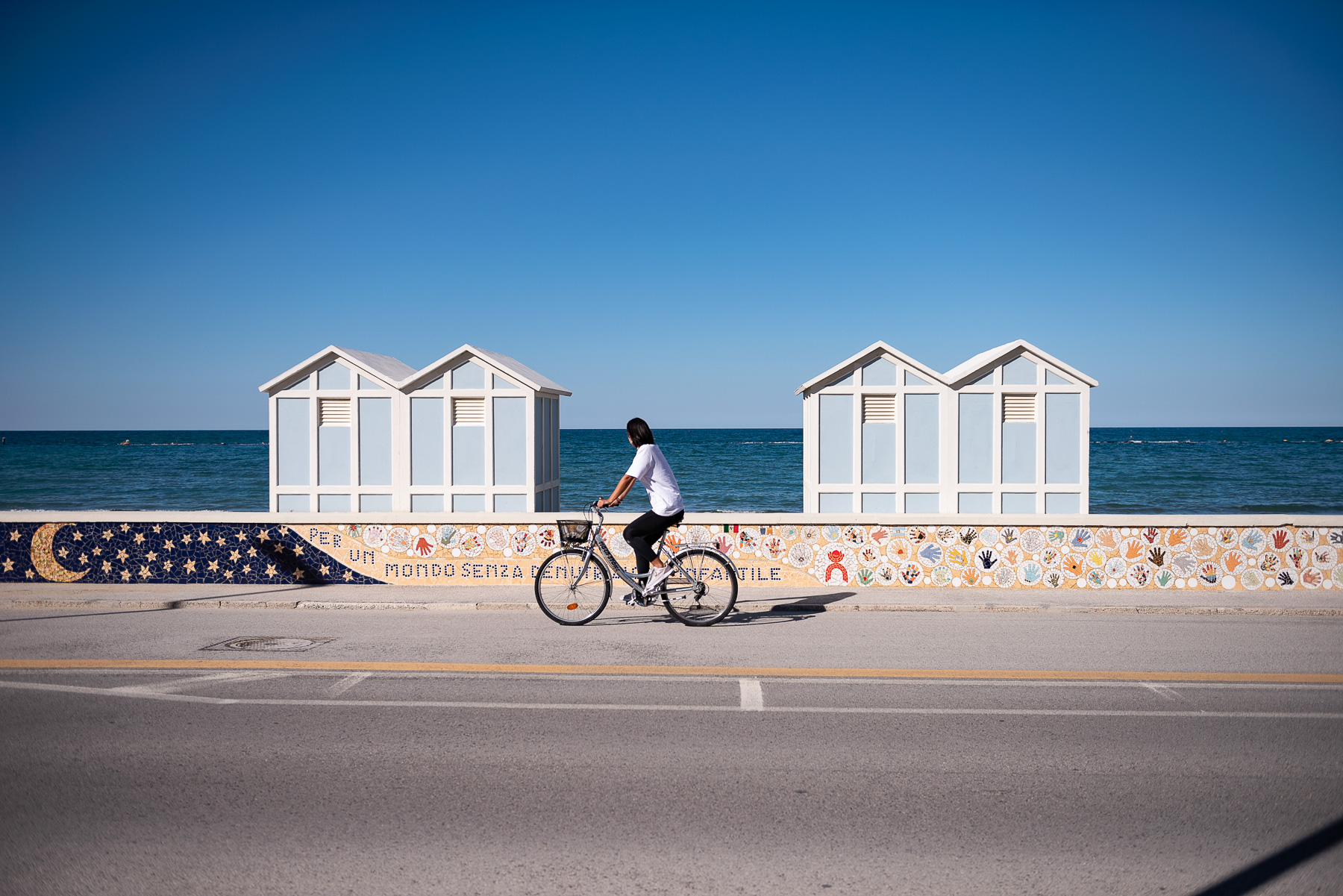 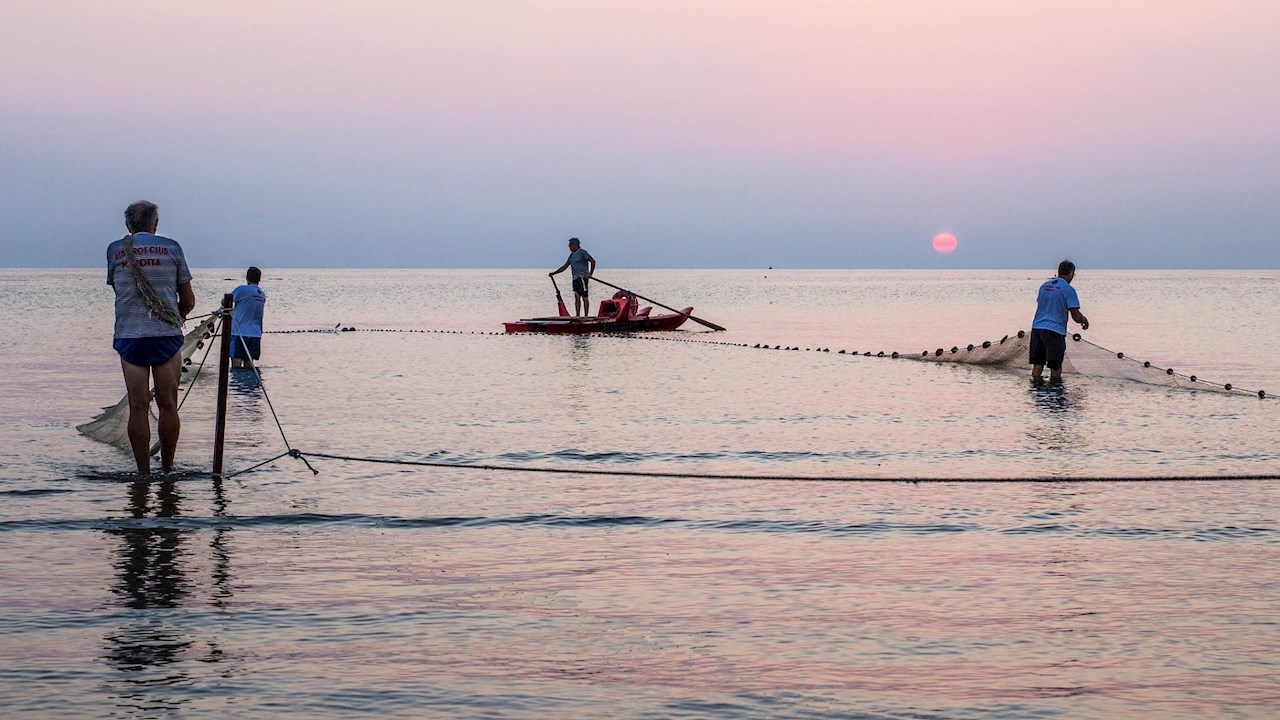 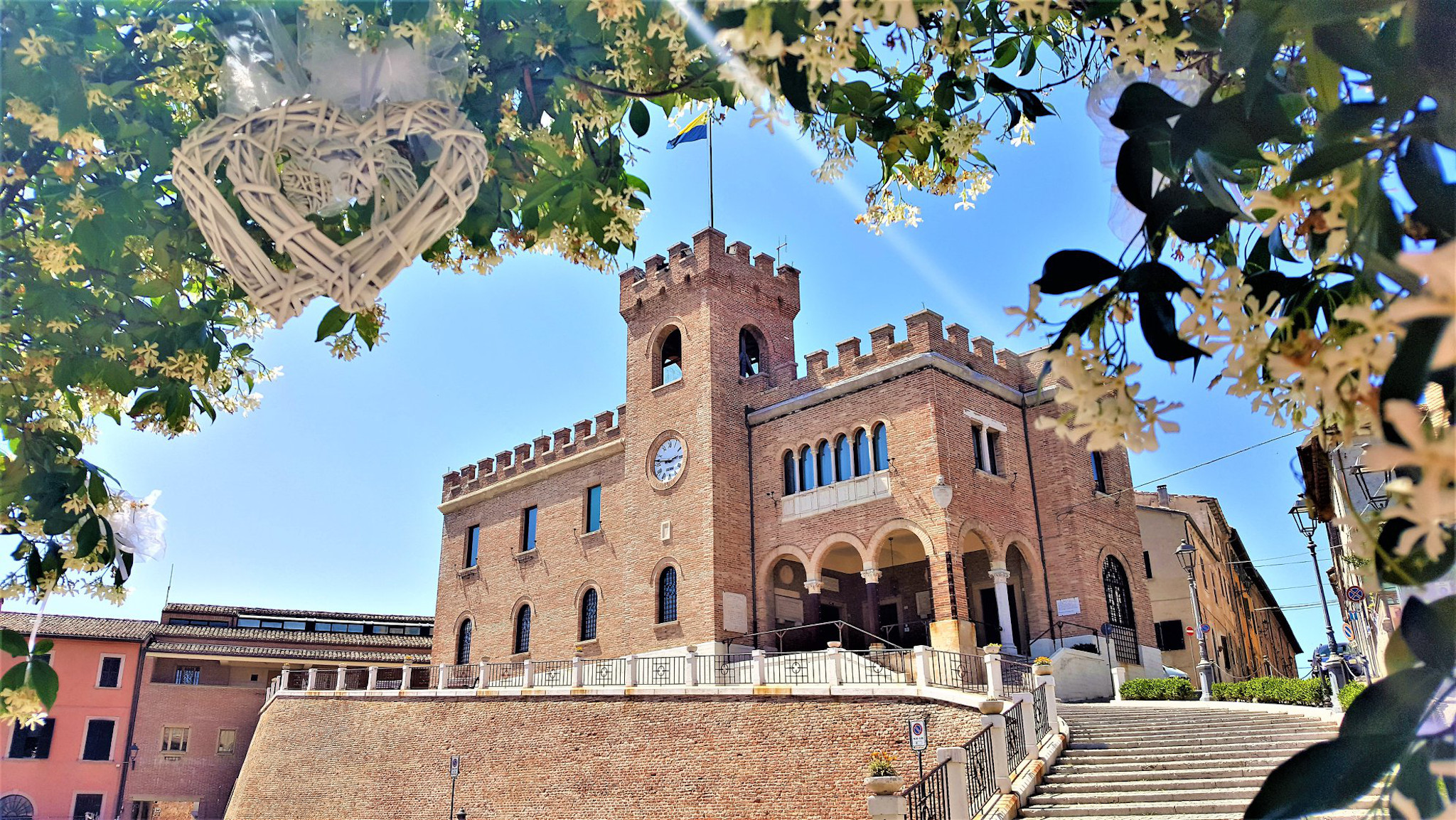 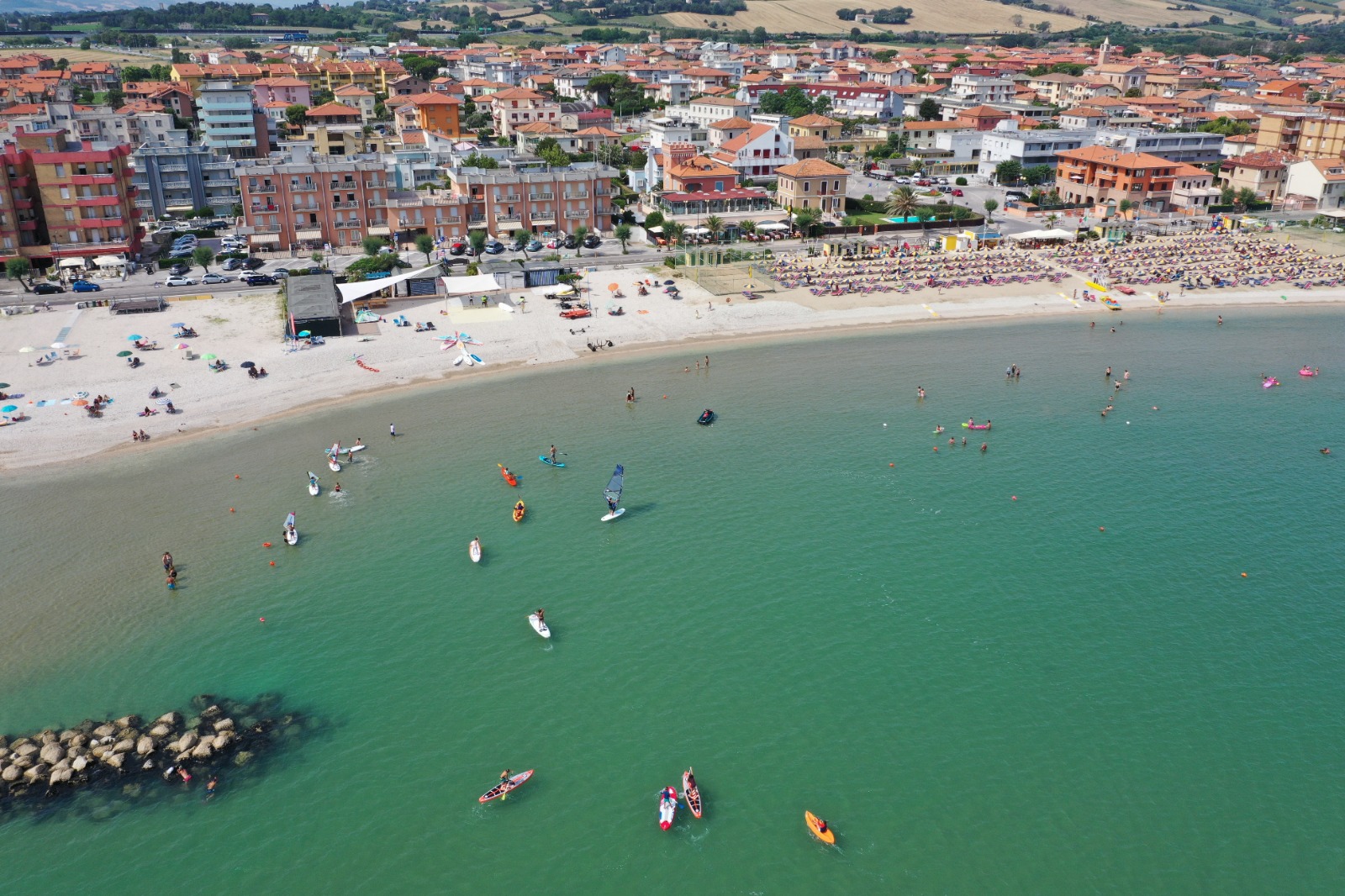 Tasty local specialties linked to the tradition of the families of fishermen and farmers, made famous by typical festivals that take place throughout the year: the garagoi (marine molluscs with a very tasty flavor), fresh fish dishes (from traditional fishing to trawl), tagliolini with broad beans (typical dish of the Marche Region) and spaghetti with red tuna sauce (typical dish of the Marche Region).

Activities on eco-sustainable mobility
The territory is active on the theme with works such as the section of the “Ciclovia Adriatica” project on the Marotta seafront.

Without wishing to refer to highly debated issues, such as the one on the place where the troops of the Carthaginian Asdrubale, brother of Hannibal, were defeated by the Roman army in what has gone down in history as the Battle of Metauro (207 BC) and which Marotta may have seen crucial phases, but we can be sure that this locality was frequented in Roman times, as evidenced by a cistern of that period that stands there.

However, it is with the construction of a post station for the changing of horses, along the bus road that ran along the coast from Fano to Senigallia, that we have in Marotta the birth of a widely documented activity from the sixteenth century. Built by the Community of Mondolfo, the Vecchia Osteria – as the station was called, also giving its name to the place – was a massive building with a hipped roof, with three arches on the facade that led into the garage, where up to six stagecoaches could stay, and alongside the stable, capable of holding about thirty horses. There were also some militias from the Castle of Mondolfo.

In any case, it is due to the decision of Pope Pius IX, in 1846, to build the Ancona-Bologna railway along the Pontifical Adriatic coast, if Marotta becomes the modern seaside resort appreciated today. In 1884 the Municipality of Mondolfo built the Mondolfo-Marotta Station at its own expense and, in a few years, the railway station became not only a reference point for trade and for the transit of travelers from the entire hinterland: the fishing village cultivated in fact very soon its own innate seaside vocation.

Rimini, the ancient Ariminum, is also a city of art with over 22 centuries of history.
Under the Arco d’Augusto (Arch of Augustus), history has passed: here two of the most important roads of ancient Italy joined, the Flaminia, which goes from Rome to Rimini, and the Via Emilia, which from Rimini crosses the whole Po Valley up to Milan.
From here, after crossing Piazza Tre Martiri (Three Martyrs Square) -the ancient Forum – you reach the bridge that, Augustus first and Tiberius later, between 14 and 21 A.D., erected using Istrian stone over the Marecchia, the river that with its ancient name (Ariminus) baptized the city. Emblematic representation of this ancient heritage is the Domus del Chirurgo (Surgeon’s House), the archaeological site in the central Piazza Ferrari, where you can admire a third-century house. Prestigious mosaics and frescoes describe a residence for private use intended for the practice of medical-surgical and pharmaceutical profession.
The medieval city grew within the Roman city. The spectacular Piazza Cavour (Cavour Square), with the Fontana (Fountain) – described by Leonardo da Vinci when he passed through Rimini in 1502)- and the most important public buildings.
Renaissance is not mentioned without mentioning Rimini, the cradle of this European artistic movement that has in Castel Sismondo (Sismondo Castle), to which Filippo Brunelleschi contributed, and in the Tempio Malatestiano (Malatesta Temple) by Leon Battista Alberti, two emblematic monuments.
Both were commissioned by Sigismondo Pandolfo Malatesta, the lord that Piero della Francesca portrayed in prayer in front of St. Sigismund in the fresco kept in the Malatesta Temple. 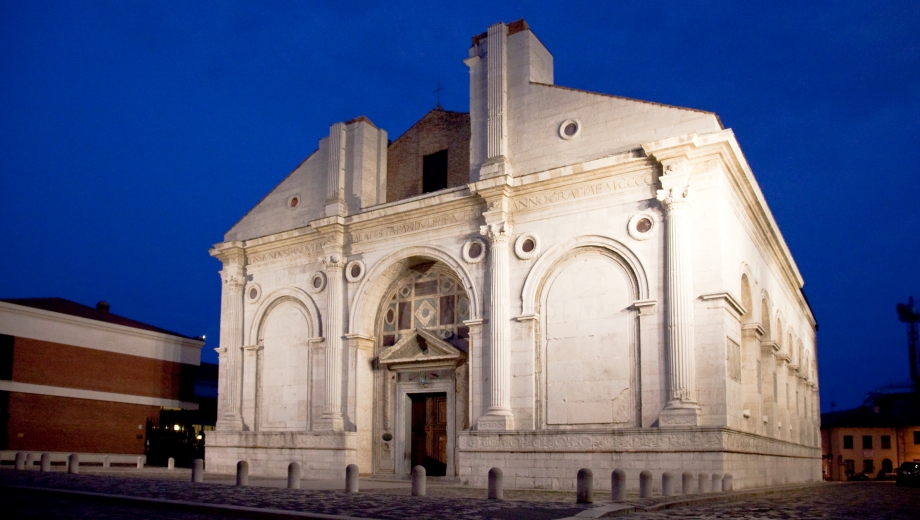 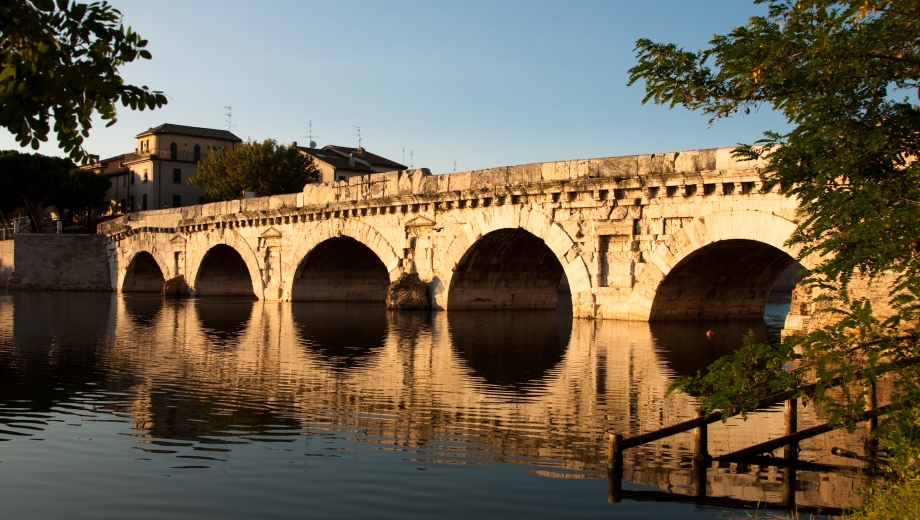 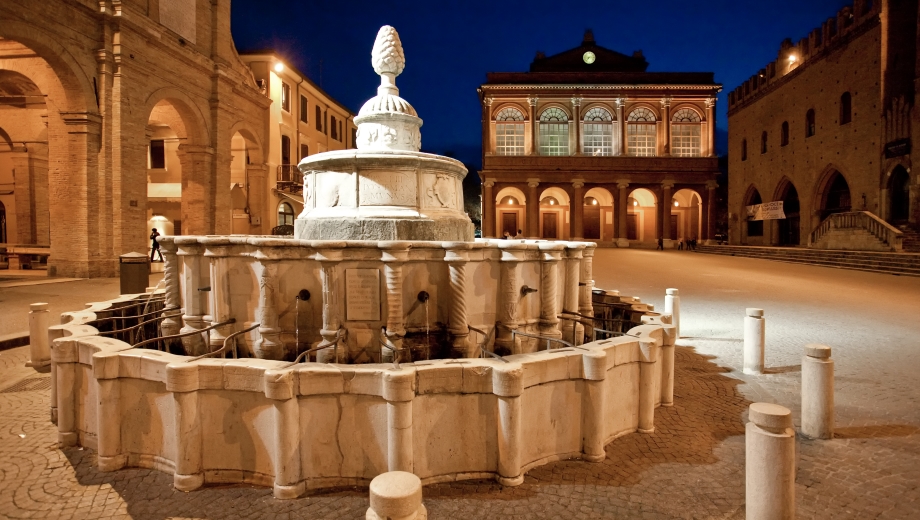 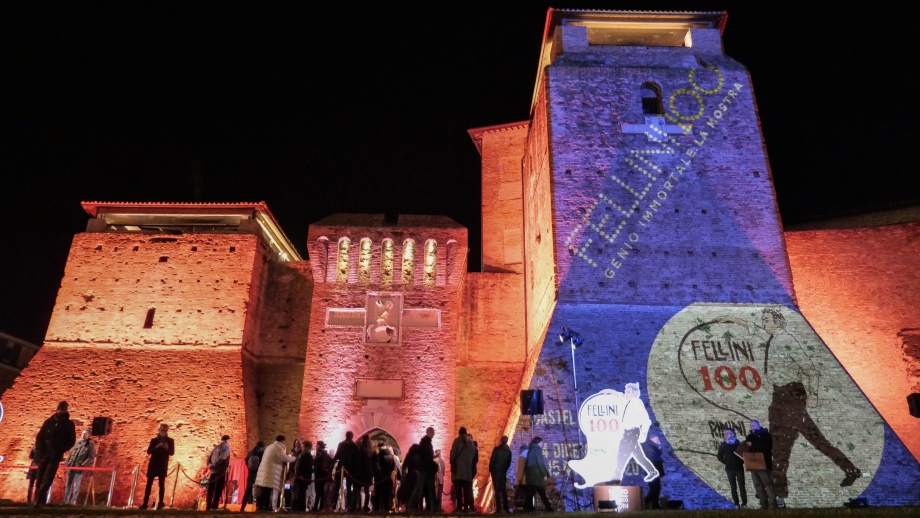 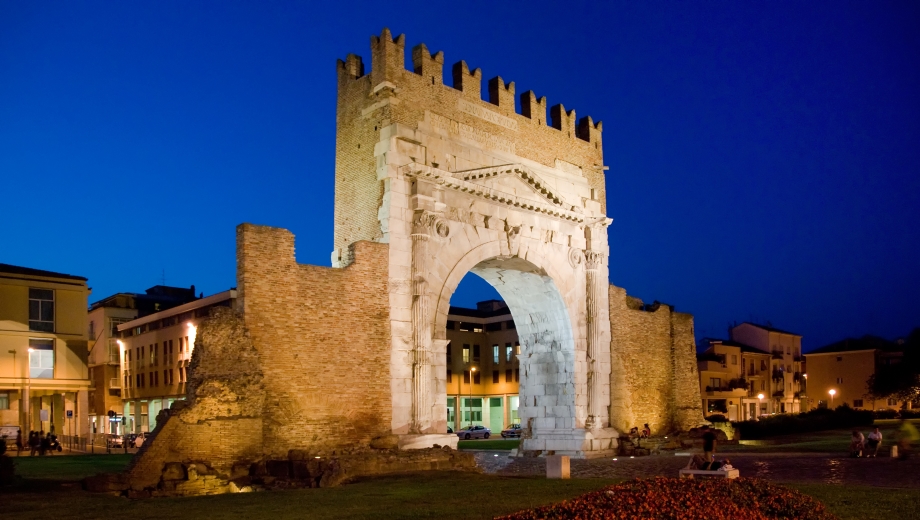 You cannot leave Rimini without having tasted a real local piada. Difficult to resist the dozens of kiosks present in the city. The Rimini piada is thinner than that of the rest of Romagna. You can fill it as you wish: ham and squacquerone or wild herbs, vegetables au gratin, up to – but do not tell the purists! – chocolate. These “little kiosks” are protagonists of the travel guide www.riministreetfood.com: a web app to find the best place to taste local street food. Key player of the typical cuisine is the blue fish from the Adriatic. Mackerels, mullets, mantis shrimps, sardines, tub gurnards and the legendary sardoncini. The most famous wine? Everyone knows it: Sangiovese, the red that warms hearts. Olive oil from Rimini hills is among the best in Italy. For those who want to take a tour through the flavours, we recommend to depart from Ponte di Tiberio (Tiberius Bridge) and cross the entire Region. The bridge is the starting point of the Via Emilia, the Roman road founded by Consul Marco Emilio Lepido in 187 B.C., that leads to Milan crossing the most famous food valley in Italy. Walking along it, you will find enogastronomical heritage of absolute value, from Parma ham to culatello di Zibello, from Modena’s traditional balsamic vinegar to Parmigiano Reggiano, plus tastings, international renowned chefs, starred restaurants, visits to production and processing places and cooking classes for everyone.

ITINERARY FROM THE MIDDLE AGES TO THE RENAISSANCE

The official date of foundation of Rimini is 268 B.C. when the Senate of Rome sent 6000 settlers to establish the new settlement. The colony was called Ariminum, named after the river Marecchia (Ariminus).
In the Middle Ages (12th century) Rimini became a Comune (Municipality) and during that period great artists worked in Rimini, starting with Giotto and the 14th-century Rimini School.
In the Renaissance, Rimini became the “Signoria”(Lordship) of the Malatestas. The most famous is Sigismondo Pandolfo, who built Castel Sismondo and the Tempio Malatestiano. Many artists arrived in Rimini. among these Piero della Francesca, Leon Battista Alberti, Giovanni Bellini.
Between 1500 and 1600 Rimini is part of the Papal State.
In 1843 the first bathing establishment was inaugurated and so began the Italian and international history of seaside tourism. The symbol of this identity is the Grand Hotel, a place dear to Maestro Fellini and a superb example of liberty architecture.