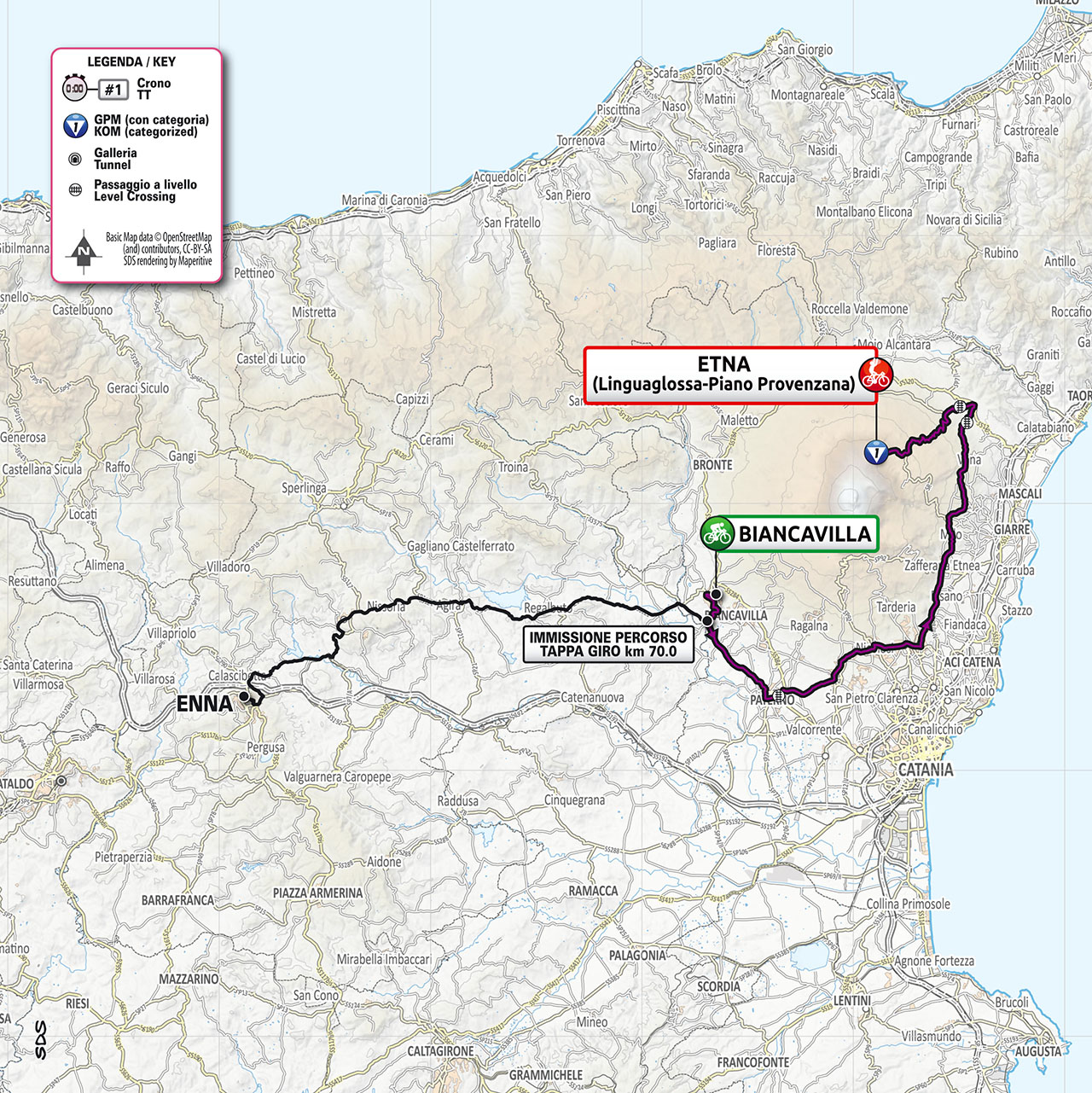 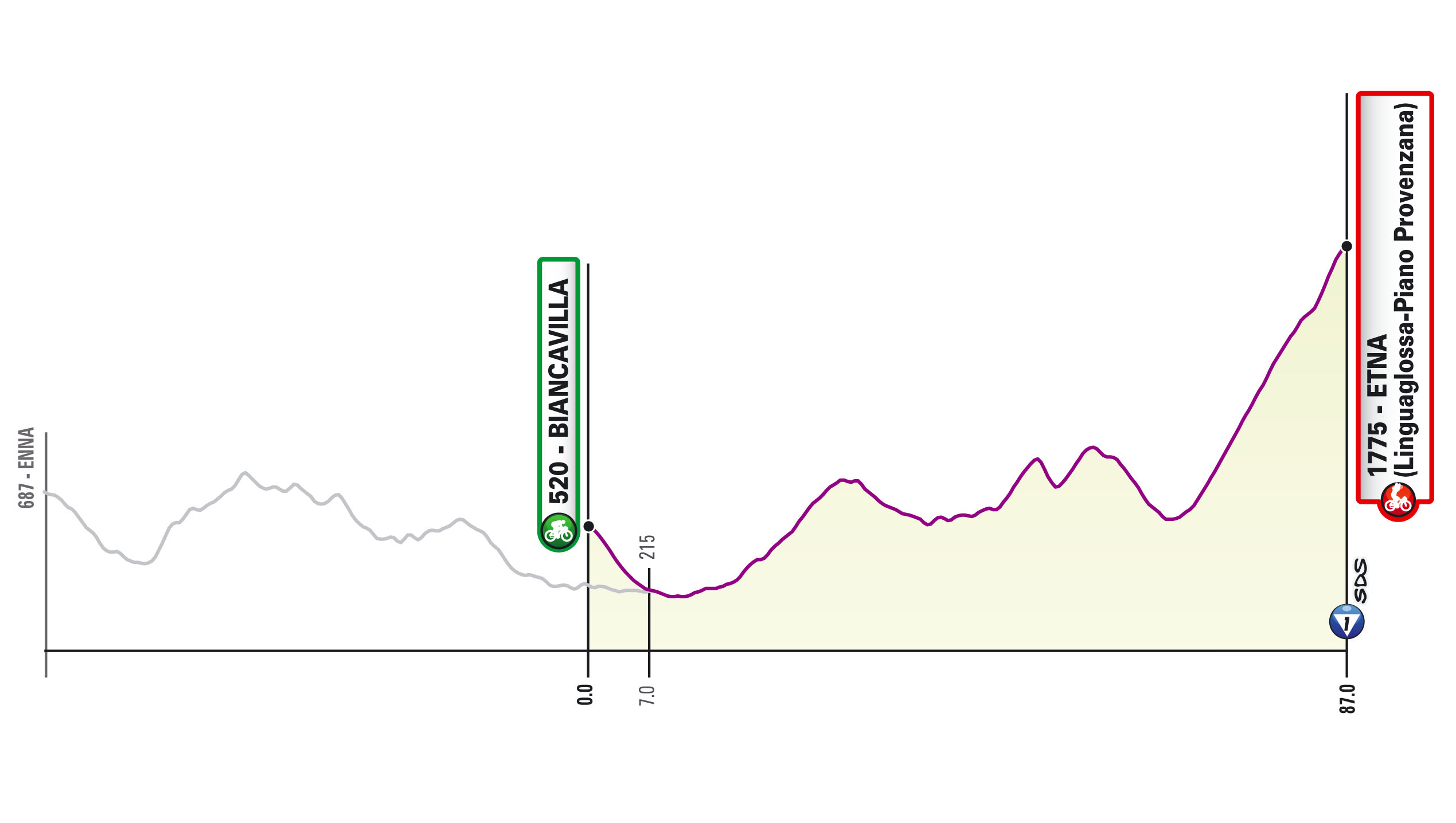 A group of Albanians who arrived in Sicily from the 15th century, due to Turkish Islamist pressures, decided to stay in the part of western Sicily in the territory on the slopes of Etna, founding in 1482 their own community called first Callicari, then Casale dei Greci, and Albavilla , and then, lastly, from 1599, to Biancavilla. 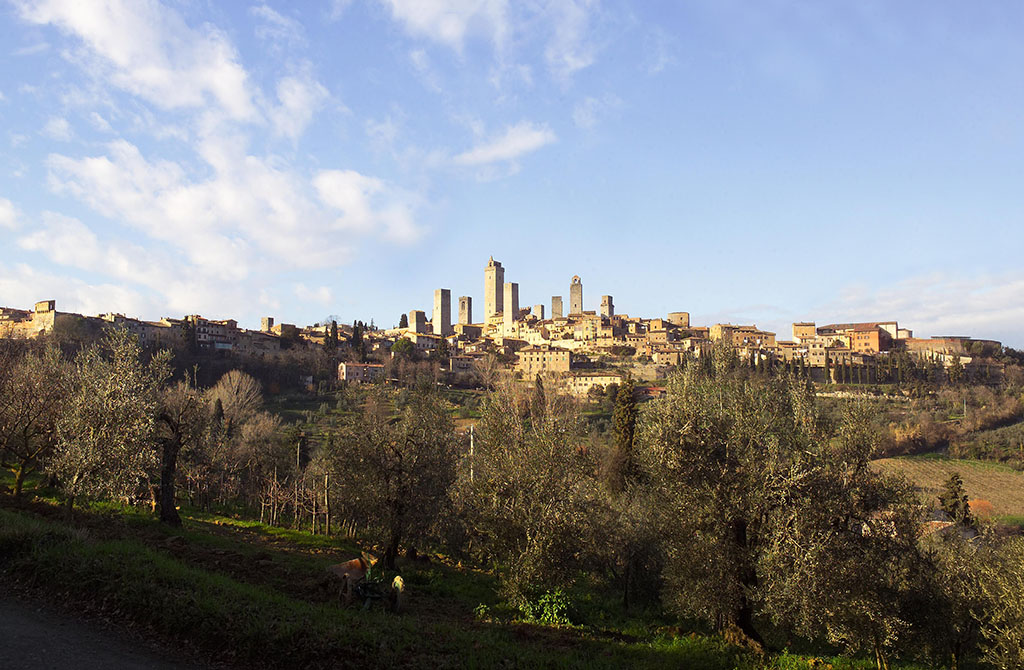 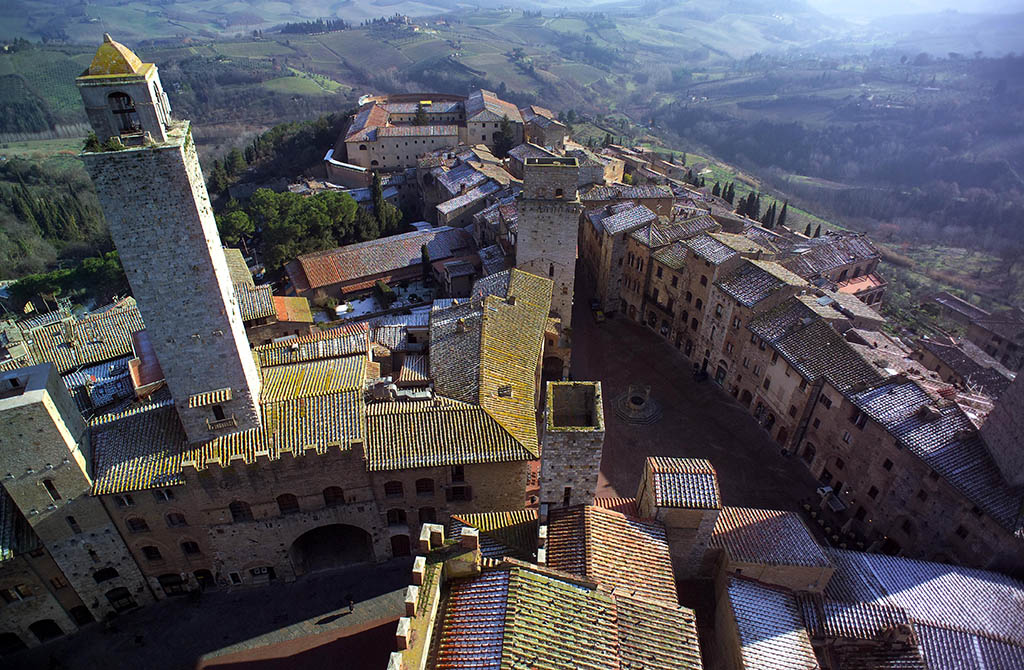 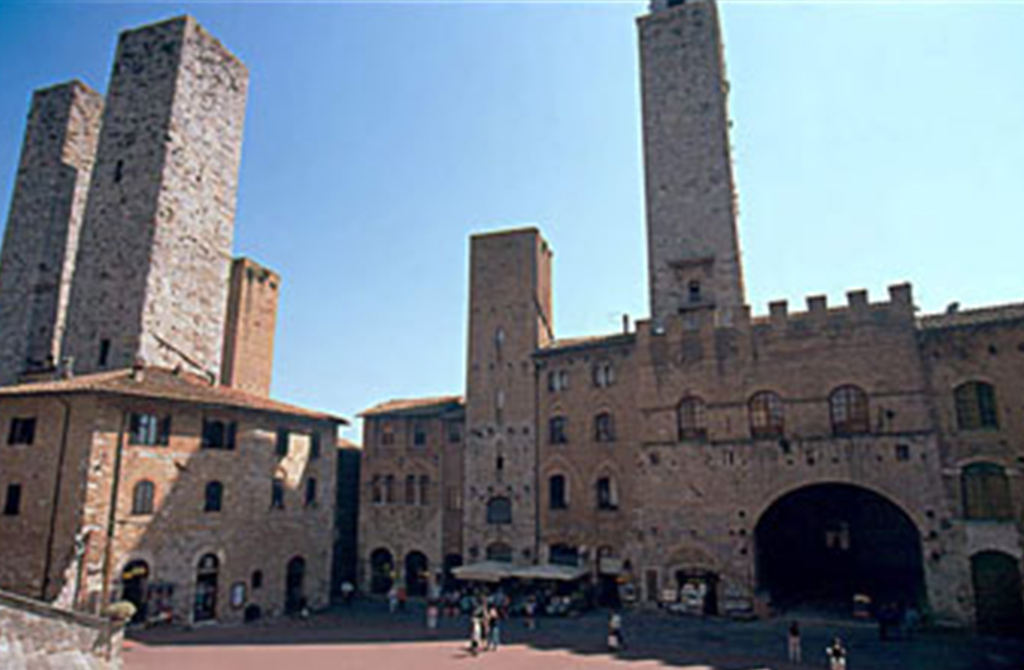 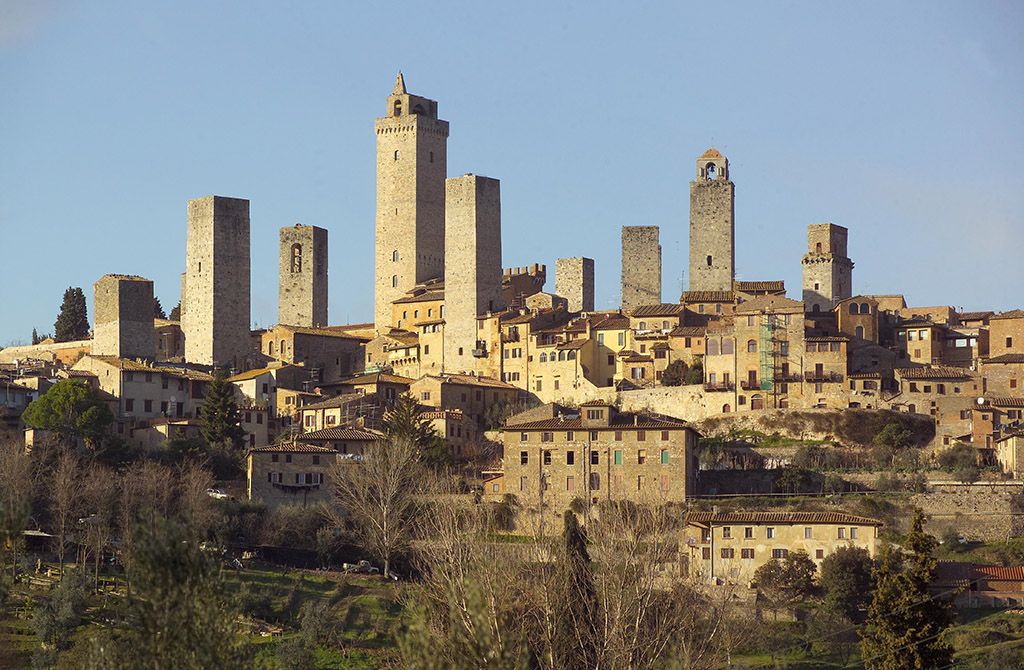 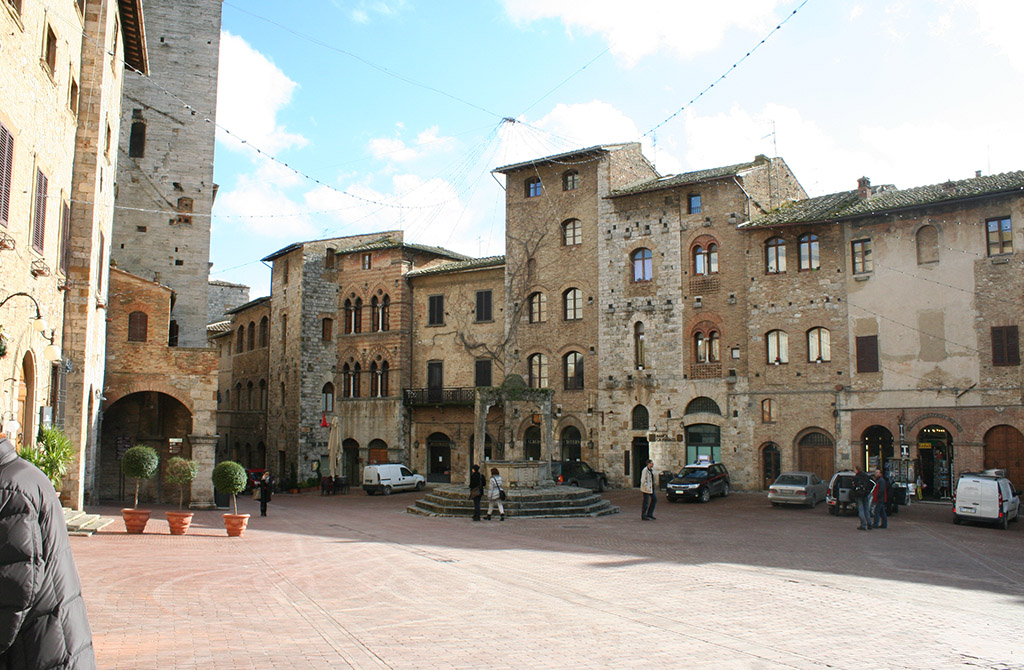 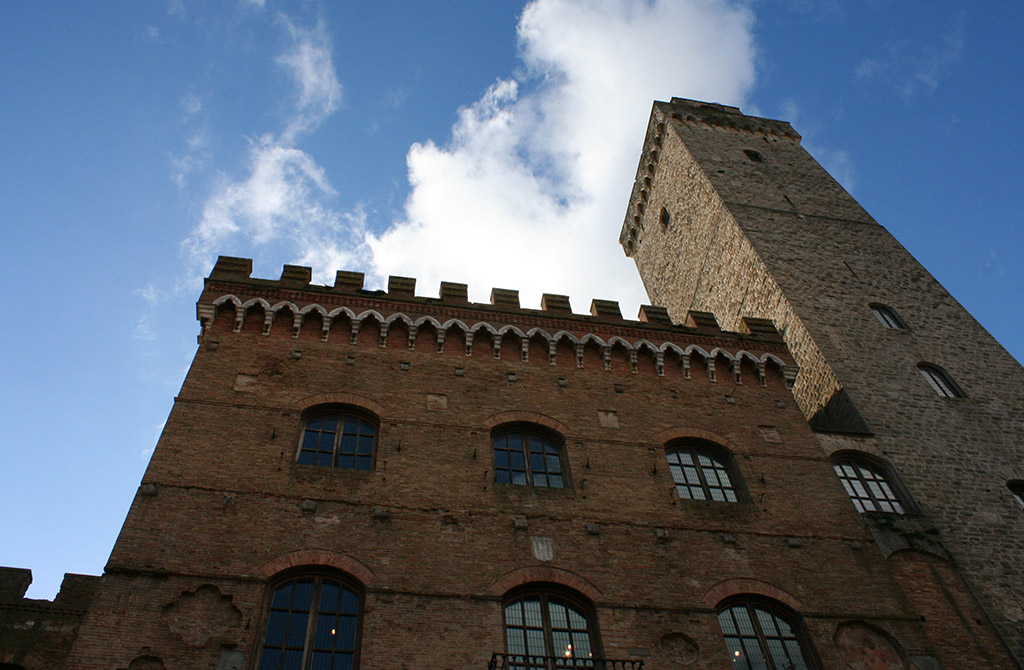 The Basilica and the churches of the city. The religious architectures were built mainly in Sicilian Baroque style, but from the eighteenth century the development was determined with buildings dating back to the early nineteenth century and other architectures belonging to the late twentieth century.

Linguaglossa is located 44 Km far from Catania, 550 m a.s.l. It is a typical Etnean village with streets and portals in lava stone, ancient buildings and multiple alleys adorned with murals. In the past, Linguaglossa was linked to the production and transport of the big pines of Etna, whose wood and resin have been indispensable materials over the centuries. 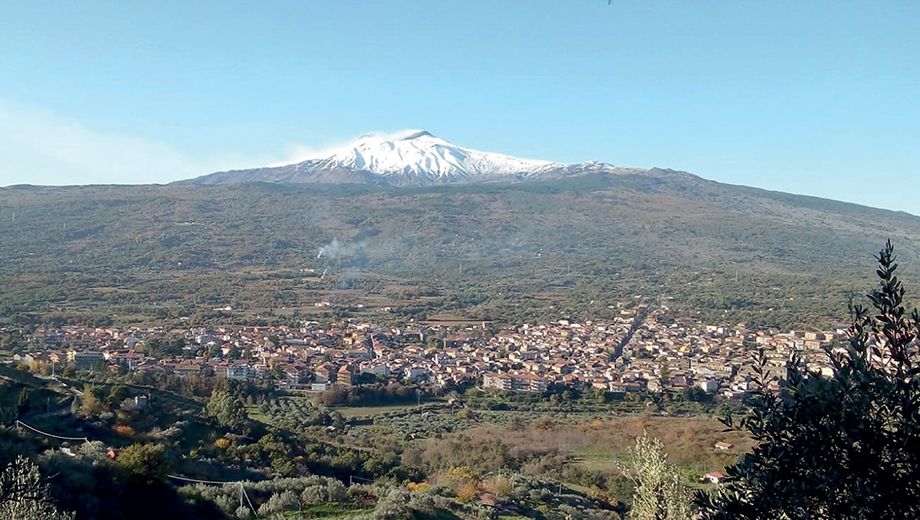 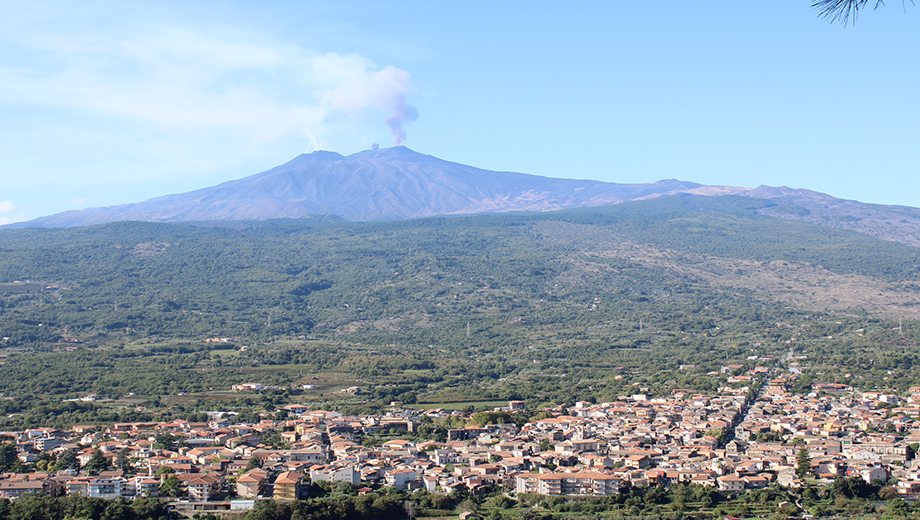 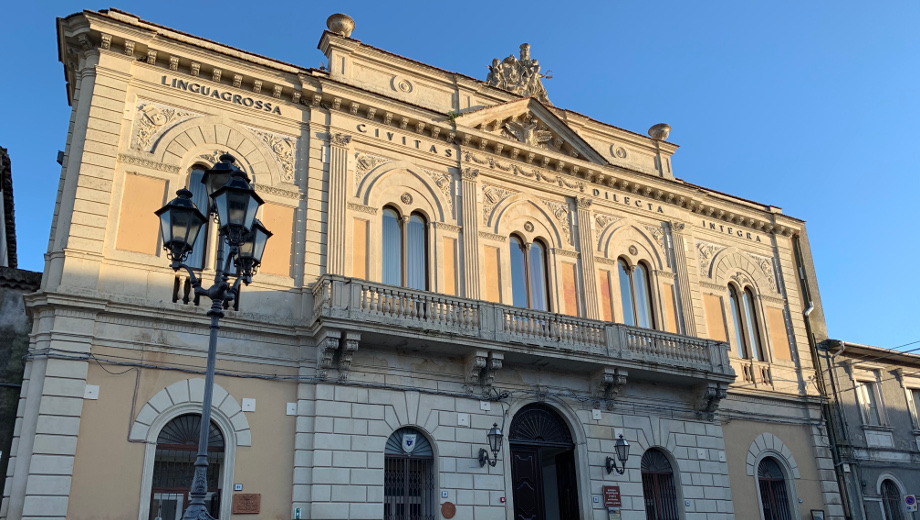 The product par excellence of Linguaglossa is undoubtedly “Salsiccia al ceppo”, pork meat cut by hand in small pieces, with the typical knife called “partituri”, and processed and stuffed on an oak stump, tree of the Etnean area.
It is flavored with the addition of salt, pepper and the typical wild fennel seeds, to be finally stuffed into natural casings. Its typical knot shape ig given by the use of a string which is removed before eating.
Usually, a way to taste this delicacy is to accompany it with “colicedda” (brassica fruticulosa), a local spontaneus vegetable from the Etnean area.
According to the tradition, Linguaglossa’s “salsiccia al ceppo” cannot be missing during popular events, especially San Martino, where you can also taste wine and roasted chestnuts.
The typical dishes of the town derive from skilful combinations of local products, such as olives, mushrooms, oregano, wild fennel etc., and consist of first corse based on vegetables and second corse of meat seasoned with local essences, side dishes of mushrooms and wild vegetables.
In all the local pastry shops you can also find almond and hazelnut pastries, “mastazzoli” and “granita” in the summer.
The wines of the area are also very famous, such as: Nerello Mascalese, Nerello Cappuccio, Nero d’Avola, Carricante, Catarratto and Minnella.
Near Linguaglossa there are numerous wineries that produce “DOC Etna” wines of excellent quality and several oil mills that produce extra virgin olive oil typical of the area.

The inhabited centre of Linguaglossa welcomes you with wide streets, ancient palaces and two luxuriant parks which are “Villa dei Vespri Siciliani” and “Villa Giovanni Milana”.
There are also many churches in the town, such as the Church of San Francesco di Paola, which is located in front of Piazza Municipio, where the First World War memorial stands imposingly.
There original building of the Church dates back to the 16th century, the very simple entrance is softened by the bronze door made by the sculptor Salvatore Incorpora in 1980, while the inside of the Church is full of Barocco stuccos. On the first altar on the right is the statue of Madonna dell’Oreto, the work of Antonello Gagini, sculpted in 1504.
Another noteworthy Church is the one dedicated to the Immaculate Conception with the adjoining convent of “Cappuccini” Fathers. On its main altar there is the most excellent of the works preserved in Linguaglossa: the famous “Custodia” of Pietro Bencivinni, carved between 1708 and 1710 in cypress, orange and walnut wood.
The main Church is the one dedicated to Madonna delle Grazie and dating back to 1613.
Its facade is severe and graceful, the inside has three naves, with a transet raised above the central nave. The work that best gives luster to the Church is located just behind the high altar, under the large organ: it is the Majestic wooden choir carved with friezes, bas-reliefs, and all-round sculptures made by the Catania master carvers G. Turrisi and G. Cirolli, in 1728.
The oldest Church in Linguaglossa is certainly the one of Sant’Egidio Abate, dating back to the 13th century.
Not too far from the latter, it is also possible to reach the SS. Antonio and Vito Church which stands out for its 18th century lava stone portal.
Finally, in Via Roma, on a small square stands the Church of SS. Annunziata, dating back to the 16th century, with a polychrome portal, composed of lava stone and red marble.
In Piazza Annunziata there are also the Museum “Francesco Messina” and the Info point “Pro Loco”, which is an interesting ethnographic museum with exhbitions of the fauna and flora of Etna and tools of the old jobs. From the square you can also start a unique artistic itinerary, the one of the murals that make Linguaglossa an “open-air museum”.

An historian of the 16th century affirmed that Linguaglossa have been fonded by a group of Genoese and Lombard artisans based in Castiglione. Around the year 1100 they left that village to settle permanently in our districts, where they began to practice the extraction of the resin from the large trunks of the pines: Linguaglossa was born. It was cited for the first time in a document of 1145 , in which Ruggero II, king of the Normans and Sicily, established the borders of the Diocese of Messina.
Subsequently the town became feudal property assigned to various families, until June 13th 1634, when the Spanish king Philip IV gave Linguaglossa the status of free city.
It was in that period that the main churches were built. From the beginning the inhabitants were farmers, lumberjacks and small landowners who demonstrated their creativity and industriousness.